The primary investing emotion “twin dragons” are fear and greed. Greed, a powerful motivator, can turn on a dime and change into fear – of loss or even fear of missing out.

Most people start by watching a market rise, afraid to risk taking a position. After the uptrend has become well-established, the “Lookie Lou’s” finally go into action. Having been “short-term bearish,” they “get long” or go “all in,” “backing up the truck.”

Sure enough – soon thereafter the price plunges. What they initially viewed as just “a correction” may turn into a long-term top. Either way, the fear of missing out is replaced by the fear… of loss, which morphs into either hanging on in hopes the price will go back up, or selling out to stop the pain of further loss. 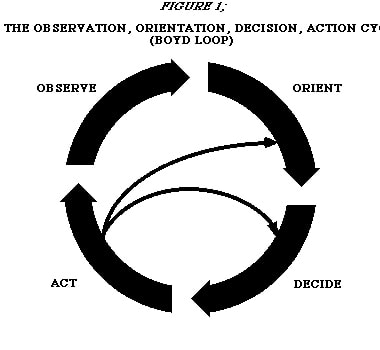 What you need to remember is that the market does not care one iota about you – or as my late grandfather would say, “Not a tinker’s damn.” If you’re going to survive and even thrive, you must have a plan. The one I’ve used and mentioned several times in this space, is John Boyd’s OODA Loop – Observe, Orient, Decide, and Act!

The Investment Arena is not a friendly place:“Trading means battling crowds of hostile people while paying for the privilege of entering the battle and leaving it whether dead, wounded or alive.” (Dr. Alexander Elder) Boy did he ever get that one right!

Sometimes people hang on for several years, and then if/when the price gets back to where they originally bought – heave a sigh of relief and sell out, since now they’re back to “break-even.”

As the bull market (which we believe is now in its early stages) builds steam, these areas will be challenged, and the predictable reaction (upside resistance) at those price levels will happen, in part because of people either selling at breakeven (where they previously bought) or because they purchased lower and now want to “take a profit,” afraid they might give back their gains in case of a decline. 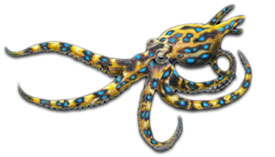 The Blue-Ringed Octopus, found along the coastlines of Australia and Malaysia, is only about 8 inches long.

It keeps out of sight, moves carefully along its shallow-water hunting-grounds, and blends in with the background. But its bite, should you happen to corner one or step on it, can kill you within a short time. Without prompt medical attention, you will become paralyzed, unable to speak or breathe. This little critter is one of the world’s most deadly creatures.

Consider going about your investment activities calmly, like the Blue-Ringed Octopus. Don’t become vulnerable to the unbalanced emotional marketplace landscape. Don’t wait until everyone else has moved the price while you hesitated. Don’t go all-in at one price point, even if you “know” the bottom is in. Don’t build such a large position in relation to your financial means, ability to accept risk, or fragile temperament, that you have a hard time sleeping at night. Otherwise, in a confused state between greed and fear, you may find that Mr. Market has become a Blue-Ringed Octopus… looking at you!

Gold has no counter-party risk: With virtually any other financial tool – real estate contracts, bond certificates, company stock, even your savings account – you as the holder must depend upon other parties to honor their agreement to pay you back.

Did you know that under current law, when you make a bank deposit, you become an “unsecured creditor“? You’re actually lending money to the bank! It can legally force you to “bail in” with some of your funds to help finance their own mistakes. Even your pension fund may be at risk as the great financial unraveling directly ahead picks up speed.

Gold mining shares, most metals’ ETFs, and futures contracts are not “real metal” nor are they exchangeable for it. Under any large gold price-rise scenario, all of these supposed ways to invest in precious metals may – and likely will – either pay off in paper promises (at their value before the actual up-move in the price) or simply default and close their doors.

For the privilege of holding these proxies for physical metals, you get to speculate on behalf of hedge funds, resource sector companies, and perhaps your “local bank”. Not to mention that your shares may be held in the “street name” of the brokerage house – available for their use and your risk.

Gold is a Blue-Ringed Financial Octopus: Gold carries no debt. Gold does not “earn interest.” It does not issue an IPO. It’s not leveraged to anything else — although it is often “hypothecated” in paper form, leased, then sold to others, to the point that it never returns to its original owners.

Considerable evidence exists that much of the gold supposedly on hand may have been “hypothecated” 100 times for every currently deliverable ounce in existence!

Gold just sits there, blending in with the background, not bothering anyone, not earning interest, minding its own business – the business of survival. Ignore its potential, and your other investments may be dealt a death blow during the financial storms now building.

Step on it as central banks and governments have done for decades, and it will eventually respond with a price shock that leaves other financial categories in the dust. In short, not having gold in your possession during a time of economic turmoil, discord and transformation, may be one of the most deadly mistakes you can make.

In 2008, the world financial community found this out when virtually every asset class went into free-fall and seized up… except gold. Yes, gold initially fell. Gold’s instant liquidity meant that it was often sold, in order to avoid the financial destruction of a person’s other investments –yet it actually closed the year higher!

Do you want to turn the emotional chaos of the marketplace on its head? If so, review the 4-step OODA Decision-Making Loop. Finally, carry out your plan, possibly choosing the buy/sell service of Money Metals Exchange. Seek to buy on a down-day/week. Buy in several tranches (portions), or perhaps on a regular dollar-cost averaging basis. Then place your metals in a safe place and go about your life.

Gold and Silver can serve as a “whole-life” insurance policy for the man or woman who possesses them. With a claim only from the holder – as they have done for 6,000 years.