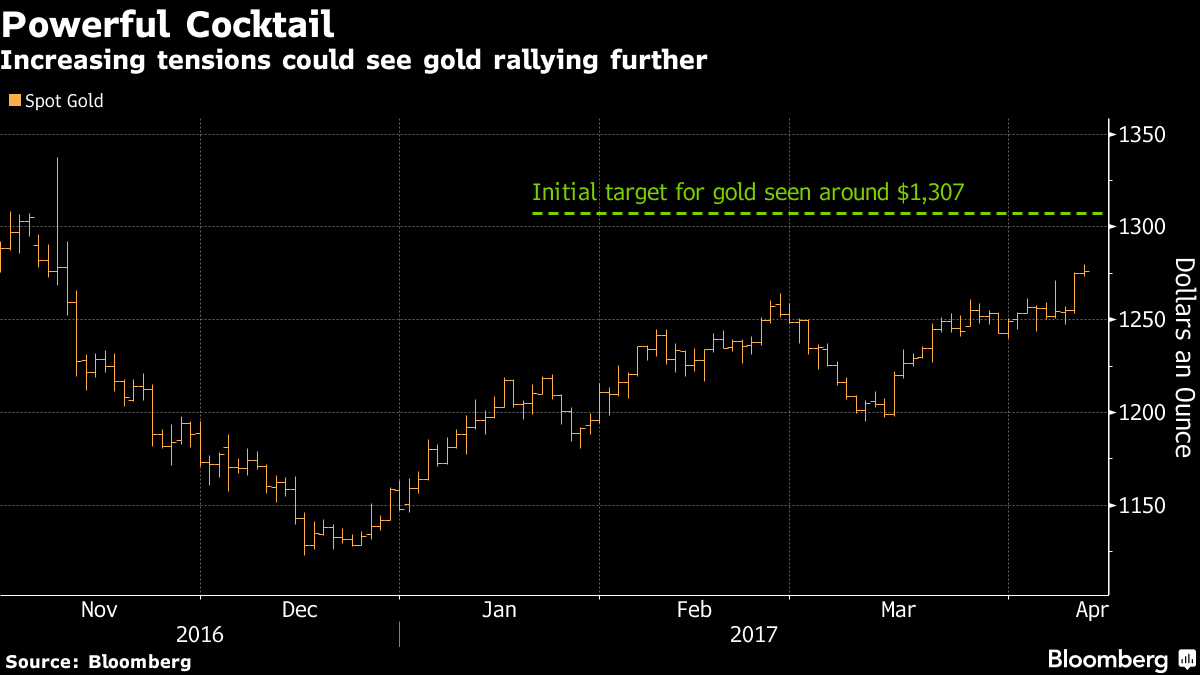 Gold prices surged another 2% to a five-month high above $1,270 amidst geopolitical uncertainty and weak US economic data. 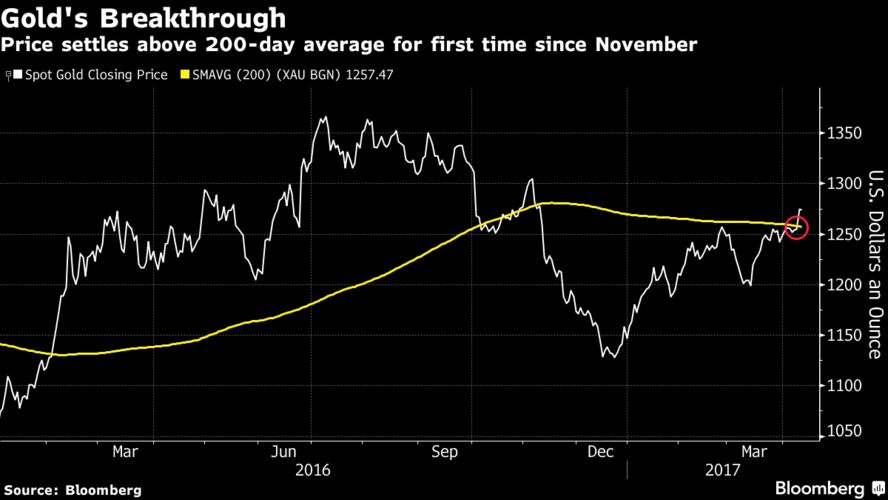 Gold’s move was a traditional flight to safety following the US’ missile attack on Syria and Trump making aggressive sounds regarding intervention against North Korea including tweets.

The weak jobs report also prompted fears that future Fed interest rate hikes could be delayed or slowed and this has provided further support for the price of gold.

Tensions between Syria, Russia, North Korea and the US underline the serious geo-political risks. There is the real risk of a serious military confrontation. This is creating uncertainty which is an environment that serves gold best.

These risks have led to very bullish activity in the options market with a surge in call option gold buying and gold ETF buying.

As reported by Bloomberg:

Prices and volumes surged Tuesday on calls giving holders the right to buy bullion at higher prices. As of 11:21 a.m. in New York, trading in the most-active option was 10 times Monday’s total, and price swings on options were at the highest in three months. Investors also returned to the biggest exchange-traded fund backed by the metal. 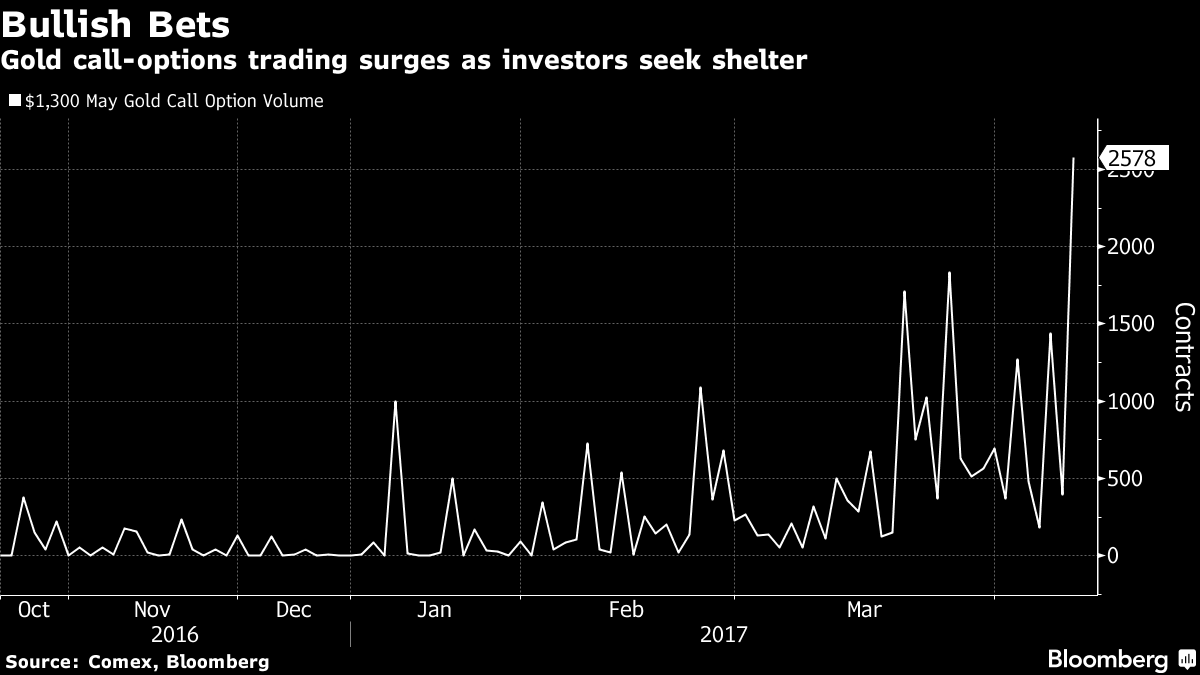 US TV hosts, Putin and Trump – all finger pointing

Since the chemical attack in Syria last week, finger pointing over who is responsible for the attack (and why) has been going strong.

Last week U.S. Senator and ex-Presidential candidate Ron Paul questioned the logic of an Assad-instructed chemical attack. With both ISIS and Al-Qaeda in retreat, what were Assad’s motives for making such a decision, asked Paul.

“It looks like maybe somebody didn’t like that so there had to be an episode,” said Paul, asking, “who benefits?”

“It doesn’t make any sense for Assad under these conditions to all of a sudden use poison gases – I think there’s zero chance he would have done this deliberately,” said Paul.

Prior to the chemical attacks it did appear that the US would be taking a side-seat when U.S. Secretary of State Rex Tillerson said, “The longer-term status of President Assad will be decided by the Syrian people.”

But then a chemical attack followed and theories abound on why it happened.

Following the chemical attack, last week, Putin called the US missile strike against Syria “an act of aggression against a sovereign state delivered in violation of international law under a far-fetched pretext.” By Friday afternoon Russian warships were headed toward the U.S. Navy warships that launched missiles.

The FT and the Guardian report today that Putin has claimed that Russia has evidence that the chemical attack was opposition rebel or terrorist led and designed to frame Syria’s President and to entice the United States into the war.

“We have information from different sources that these provocations – I cannot call them otherwise – are being prepared in other regions of Syria, including in the southern suburbs of Damascus where there are plans to throw some substance and accuse the official Syrian authorities.”

Putin also dismissed claims by the US that they attacked a Syrian air base due to presence of weapons of mass destruction, saying that we have seen such claims already in Iraq in 2003.

In his disgust that NATO had not ruled that the US missile attack was a breach of international law, Putin called them “bobble heads.”

Last night the White house went on to accuse Moscow of releasing “false narratives” to mislead the world about the chemical attack in Syria last week.

Elsewhere in the US, MSNBC’s Lawrence O’Donnell told viewers a rumour he’d heard that Putin had told Assad to carry out the chemical attack in order to provoke a military reposes from Trump. Thereby, dispelling rumours that the US President and Putin are too close.

His evidence for this? He has none:

“It’s perfect, what you won’t hear is proof that that scenario that I have just outlined is impossible, because with Donald Trump anything is possible.”

Later today Russian Foreign Minister Sergey Lavrov will meet Mr Tillerson, US Secretary of State. Some hope should be taken from the fact that Tillerson is heading to Russia although he is unlikely to persuade Putin to distance himself from Assad.

Both the US and UK have failed to persuade G7 foreign ministers to impose new sanctions on Russia and Syria.

If events in Syria means that you have missed what has been happening with North Korea then the following Trump tweets that North Korea was “looking for trouble” and that the United States would “solve the problem” with or without China’s help, will give you some indication.

Chinese government-influenced Global Times said Beijing would support stiffer UN sanctions, including “strictly limiting” oil exports to North Korea should it conduct a nuclear test. “China, too, can no longer stand the continuous escalation of the North Korean nuclear issue at its doorstep,” the newspapers editorial said. “Instead of accepting a situation that continues to worsen, putting an end to this is more in line with the wish of the Chinese public.”

For now, the world’s eyes are on Syria, with some reassurance about Trump’s upcoming conversation with China. However, it is right be nervous of macho strong men who have access to nuclear weapons.

War! What is it good for? Absolute uncertainty!

Whilst the North Korea situation is perhaps being handled with slightly more measure than the Middle East, someone is going to war and it is on everyone’s minds.

This Google Trends charts shows the ‘interest over time’ in the phrase ‘going to war’, one can clearly see the spike in interest in recent months.

Whichever theory is correct over who is provoking who in Syria (and there is probably some truth in them all) it all serves one purpose in the wider world – to build up the uncertainty felt across the globe.

We are seeing a rise in risk aversion across markets. Politicians should be working to reduce risk, however they are all working to their own agendas and, as a result, the levels of risk in the economy are growing.

In recent months we have mentioned uncertainty in relation to European elections, the Brexit vote, and the turbulent Trump Administration. We have also mentioned activity in Syria, North Korea and relations with Russia and in the last week it has all seemingly started to come to a head.

There have long been bad jobs reports or options about what the Fed may or not do. However war in the Middle East, with Russia on the opposite side, whilst the prospect of nuclear war in the background, is not something that we or governments can just push to one side or begin to predict the outcome of.

There is so much that is out of not only our hands but also politicians’ that we know more about what we don’t know than what we do. In times such as these we need to consider our portfolios and ask what we do know about investments.

What has history shown time and time again?

History has shown that in times of both peace and war, there is little we can rely on that will not be manipulated or debased in order to pay for war. However, gold and silver have long been able to hold their own in the backdrop of warring countries, posturing politicians and extreme uncertainty and conflict – indeed they tend to thrive in such conditions.

Gold is performing well and will continue to do so as investors know that it is a hedge and a safe haven when we are uncertain what lies on the horizon.

Those who began to buy gold this week are becoming increasingly aware of this, and this is why we advise you to own some physical gold in a safe jurisdiction in allocated and segregated storage.