It may feel like we’ll escape a debt crisis since, well, the world hasn’t ended in spite of runaway debt levels. Some of us hard money people feel like we’re taking crazy pills; how the heck can debt be so out of control, so completely unpayable, and yet the financial system keeps chugging along as if nothing’s wrong?

Well, history has a message for us: the current calm won’t last forever, because there is a direct link between government debt levels and the number of financial crises that occur. And since global debt levels are high—the second highest level in the past 150 years—it’s not exactly a stretch to conclude that another financial crisis is coming.

Analysts at Deutsche Bank recently released an extensive study that demonstrates the link between debt and crisis. One chart in particular screamed for attention.

They measured G-7 government debt levels, as a percent of GDP, and charted that figure against the number of crisis those countries have experienced. Here are the primary events they classified as a crisis or shock:

They logged every time a nation encountered any of these events within a one-year period, and compared that to government debt levels. It’s not hard to spot the correlation. 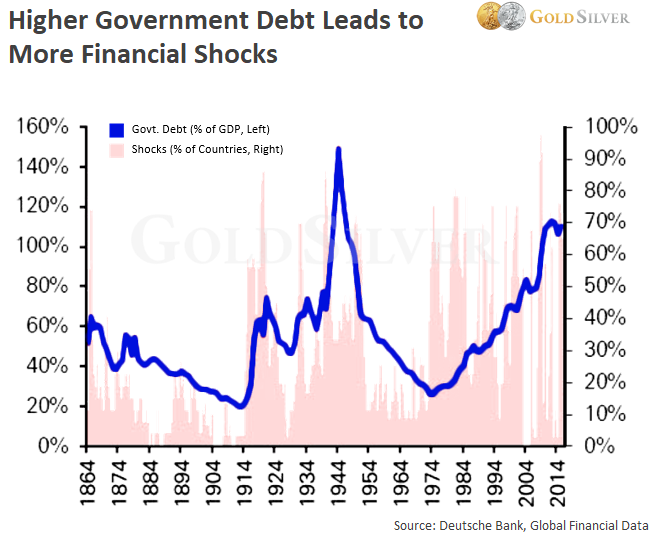 Since 1864, the higher government debt levels, the greater the number of countries hit by a financial crisis or shock. Even in the 1970s when debt was “low,” it rose steadily, indicating politicians were relying on debt to help solve their economic problems. And that reliance led to greater crises.

You can see that current G-7 government debt levels are at the second highest reading in at least 153 years. Are these countries really going to buck the historical trend and avoid any further financial crises or shocks? It would be borderline irresponsible to think so (hello, gold haters).

So how did we get into this debt spiral?

The Root Cause of Current Debt Levels

The simplest explanation is that governments spend more than they bring in. And since each year’s deficit is added to the debt, the total keeps going up and up. It’s so high now that it’s mathematically impossible to repay (at least in current dollars).

How is it that central bankers and politicians can continue this free-for-all spending? You can tie it to one thing…

The world made a final break from a gold standard in 1971, when President Nixon ended gold convertibility. Up to that point there was some kind of gold (or silver) monetary regime for literally centuries (the primary exception to a lid on spending was during periods of war as the chart shows).

Now the entire world is on a fiat currency system for the first time in recorded history. And a fiat currency system always leads to ever increasing debt and money printing, because politicians and central bankers have no built-in controls to prevent them from doing so. Need more currency? Just spend it anyway or print it.

I have a question for those who mock the gold standard, or believe the fiat system is superior: why have all of the following events occurred since the world severed its last monetary tie to gold in 1971?

That’s 18 major financial crises in 46 years. An average of one every two-and-a-half years.

I don’t think it’s reasonable to assume we’ll escape another crisis. Government debt is simply too high, and history shows this makes crises much more likely, maybe even inevitable.

This is a primary reason Mike and I continue to buy gold regularly. In fact, while researching this article, I ordered another one of these.

I hope your portfolio is ready for the next financial shock that history says is on its way.