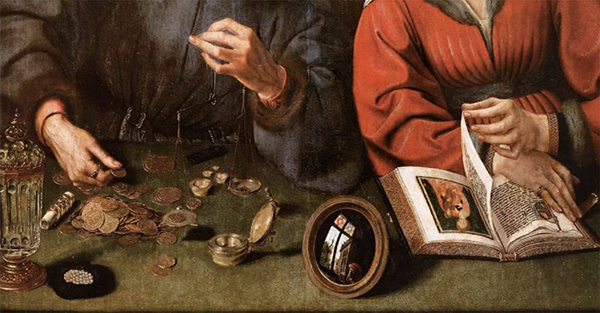 In the late 1400s, the city-states of Italy were among most dominant powers in the world.

Most of the city-states had abandoned the feudal system that persisted across Europe.

So Italy was one of the only places on the continent where anyone, including foreigners, could work hard, take risks, and become wealthy.

People could start businesses and own private property– revolutionary concepts in the 1400s.

Italy was truly the America of its day, and people from all over Europe flocked to the city-states in search of wealth and freedom.

Scientific, medical, and technological advancement flourished, as did commerce and banking.

The Medici Bank in Florence was by far the largest bank in Europe in the 1400s, and they helped popularize a double-entry system of accounting and the widespread use of credit, both of which still define modern banking.

Early Renaissance banks realized that hauling giant bags of gold coins across the countryside to settle payments with one another was expensive and risky.

Instead, every time they made or received a payment, the banks would adjust their accounting ledgers and then periodically get together to make sure everyone’s numbers matched up.

Italian banks perfected this technique and developed a comprehensive set of accounting rules that everyone followed.

When the bank Monte dei Paschi di Siena was founded in 1472, they adopted this system as well.

Despite all of our modern technology, commercial banking has changed very little over the past 5+ centuries.

Even today, whenever banks transact with one another, they’re merely making accounting entries in their ledgers.

It’s not like there’s actually any money that changes hands. Banks don’t FedEx cash or coin to one another to settle up. It’s all just digits on an electronic balance sheet.

The biggest “advance” in modern banking has been the involvement of government and central banks.

Back in the Renaissance, banks spent years building up a solid reputation as conservative, responsible custodians of other people’s money.

They had to earn their customer’s trust the old-fashioned way. It wasn’t handed to them by some government agency.

Today, few people give a single thought about their bank.

We’ve been programmed to sign over our life’s savings to a complete stranger simply because the government says it’s OK.

That same government has lied to us about everything else imaginable, ranging from the existence of Weapons of Mass Destruction to whether or not he had “sexual relations with that woman.”

Yet this government-sanctioned trust is routinely abused.

Hardly a month goes by these days without a major banking scandal.

Wells Fargo is in the spotlight right now for having fraudulently manufactured new accounts without customers’ consent (and then charging FEES on top of that).

And right this moment Wells Fargo is scrambling once again for submitting a questionable solvency plan to the Federal Reserve.

But that’s just the tip of the iceberg.

They force law-abiding customers to jump through bureaucratic hoops to prove that we aren’t criminal terrorists, but then giant banks like HSBC and Barclays literally do business with terrorist groups.

And they maintain a strict culture of secrecy.

As depositors, we don’t have the foggiest idea what our banks are actually doing with our money.

Their financial statements provide cursory summary numbers for categories like “LOANS” or “INVESTMENTS”.

But there’s no detail for us to see whether those loans and investments are safe and conservative… or whether they’ve put our savings in danger once again.

One common technique that banks have used over the last few years is reclassifying their bond investments.

Typically a bank has to report the gains and losses of its bond investments each quarter.

But banks have the option to reclassify their bond investments into a different category called “hold to maturity,” in which they no longer have to report the losses.

As you can imagine, when bond values decline, many banks conveniently reclassify their portfolios, thus hiding the losses.

Look, I’m not suggesting that banks are about to collapse. Some of them are in great shape.

And others… yeah, they’re about to collapse. Like Monte dei Paschi di Siena, and most of the rest of the Italian banking system.

What’s important is to realize that banking is a black box with zero transparency, NOT the risk-free fantasy that we have been told.

We can see this right now in Italy.

If a bank goes under, shareholders will be wiped out first.

But as a depositor, you’re actually a creditor of the bank– an unsecured creditor who has nothing more than a claim on your account balance.

Most countries, including Canada, the United States, and most of Europe, have passed “bail-in” legislation to penalize a bank’s creditors in the event they collapse.

So, depositors can be on the hook for a bank’s losses as well, just as we saw in Cyprus back in 2013.

Depositors are supposedly protected by deposit insurance like the FDIC.

But a single bank failure can easily wipe out these insurance funds (which happened in 2008).

And most governments are now too broke to recapitalize them.

Bottom line: It matters where you put your money. They evidence is pretty obvious that banks are not risk-free.

Why take the chance?

You can quickly mitigate these risks at practically zero cost by holding a portion of your savings in a safer, better capitalized bank… or outside the banking system in physical cash or gold.