The Primary Silver Miners lastest results were quite dismal as their All-In Sustaining Costs to produce silver were considerably higher than the market price.  Many of the silver miners production costs increased in the third quarter of 2018 due to higher energy, material, and labor costs.

Only one silver mining company out of the group posted a profit of $6.8 million for the quarter, and that was Fortuna Silver Mines.  The biggest loser was Coeur Mining which suffered a $53 million loss for the period.  Even the largest silver miner in the group, Pan American Silver, reported a surprise loss of $9 million Q3 2018.

Now, according to the silver mining companies All-In Sustaining Costs (AISC), only two were lower than the current silver market price: 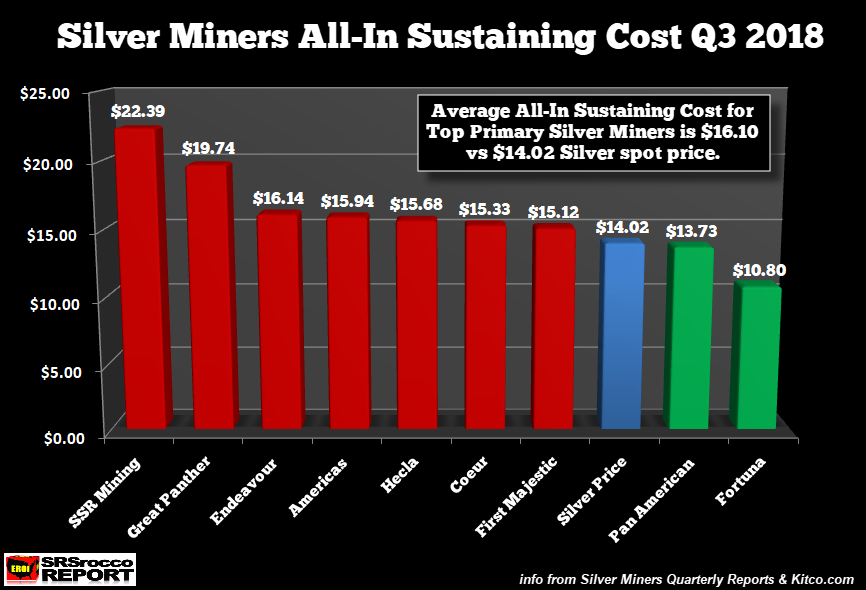 When I put together this chart, the silver price was trading at $14.02 but has jumped up to $14.17 as the broader markets continue to sell off.  However, as we can see, seven of the nine top primary silver miners AISC is higher than the silver market price (BLUE BAR).  The highest AISC of $22.39 per ounce is awarded to SSR Mining which changed its name from Silver Standard.  SSR Mining is mostly a gold mining company with a very high-cost open-pit silver mine in Argentina called their Puna Operations.

While Pan American Silver and Fortuna published lower AISC’s than the silver market price, the average AISC for the entire group was $16.10.  Even if I was to remove the highest (SSR Mining @ $22.39) and the lowest (Fortuna @ $10.80), the average All-In Sustaining Cost of these miners would still be $15.95.  Thus, the top primary silver miners average AISC is $2 higher than the present silver market price.

I find it quite interesting that the gold and silver prices continue to show strength during major selloffs in the broader markets.  At some point, investors are going to rotate out of falling stocks and real estate and into the precious metals and the miners.  However, FEAR has not yet made its way into the investor psyche… but it will.

Furthermore, if we consider the Free Cash Flow in the primary silver miners, they are spending $2.5 more per ounce than they are receiving from cash from operations: 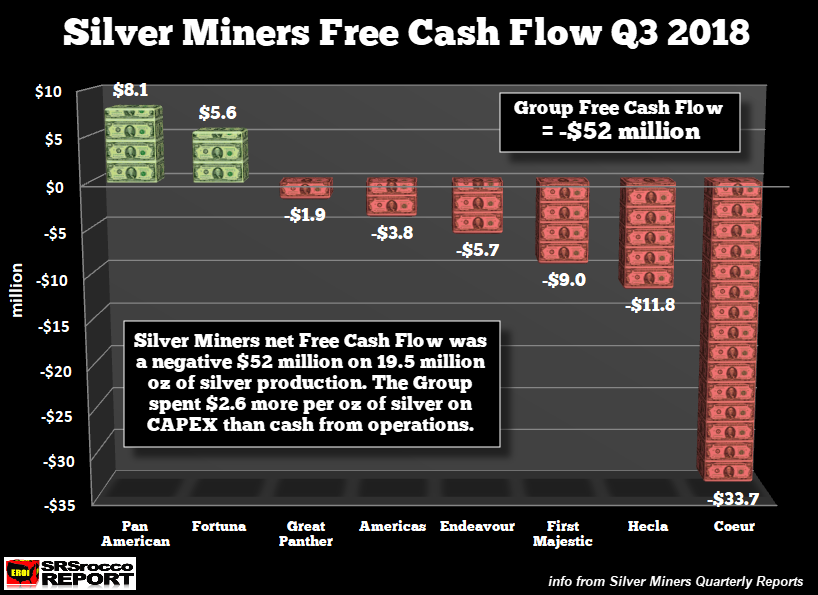 The two miners with positive Free Cash Flow in Q3 2018 was Pan American Silver ($8.1 million) and Fortuna ($5.6 million).  However, the majority suffered negative free cash flow with Coeur Mining being the highest at -$33.7 million.  The net free cash flow for the group was a negative $52 million.  Thus, the group was spending $2.6 per ounce more than the cash received from operations.

I calculated that figure by dividing the negative free cash flow of $52 million by the 19.5 million oz produced by the group.

It has been a while since I posted information on the silver miners.  If you have read my articles going back to 2012, you will notice that the group is smaller.  That is due to the shutdown of the Tahoe Resources Escobal Silver Mine in Guatemala, and the removal of SilverCorp Metals and another smaller company.  I had 12 primary silver miners in my group, but now am only concentrating on nine.

Ever since the Muddy Waters Research came out with negative information on SilverCorp Metals, located in China, I don’t trust the company’s data.  While some readers may be upset with this call, I suggest that you watch the documentary, THE CHINA HUSTLE:

In the movie, Carson Block of Muddy Waters provides details of why he believed SilverCorp Metals was not truthful with its data, which is why he shorted the stock.  To be clear, I am not negative on SilverCorp Metals; rather I remain neutral in that I’d rather not use their data in my analysis.  Each investor needs to make their mind up on the matter.

That being said, the primary silver miners are struggling with the low silver price.  While the silver price could go lower, I still believe silver is closer to a low than the stock and real estate markets.  With that understanding, there is a great deal less risk owning silver today than owning most stocks and real estate.

Today, Pan American Silver announced its intention to purchase Tahoe Resources and its troubled Escobal Silver Mine in Guatemala that has been shut down for more than a year.  You can read about my take on the Escobal Mine here: WORLD’S 2ND LARGEST SILVER MINE SHUT DOWN: Implications For Company & Market.

The local peoples living around the Escobal Mine have been against the silver project ever since the beginning.  The Guatemalan Supreme Court stepped in and revoked Tahoe’s Escobal Mining license until a consultation of the indigenous communities had been taken.  To me, it is a serious GAMBLE for Pan American to take on this problem.

While the Escobal Mine is the second largest primary silver mine in the world, the evidence I have read suggests that the local people do NOT WANT the mine to reopen.  I have read some western articles suggesting that the local people are protesting so that they can be compensated by a percentage of the mines earnings.  However, the articles coming from the local papers in Guatemala state the exact opposite.  The local people want nothing to do with the mine and would like it to remain closed so they can be assured that the area around them will not be polluted and to also protect their valuable water supply for farming.

So, it will be interesting to see if Pan American Silver can resolve these issues with the local people, but I have my doubts.  Of course, anything is possible, but it still surprising to see Pan American Silver acquire such a troubled asset when they could have concentrated on other projects in their pipeline.

Lastly, even though the primary silver miners are currently struggling, I believe it’s only a temporary situation.  As I have stated over the past year, when the markets crack, the precious metals and the miners will be the GO-TO ASSETS.  Unfortunately, most precious metals investors have given up on the metals and the miners, but this is precisely the time to start getting interested.  Only successful investors buy when the price and sentiment are at an extreme low.