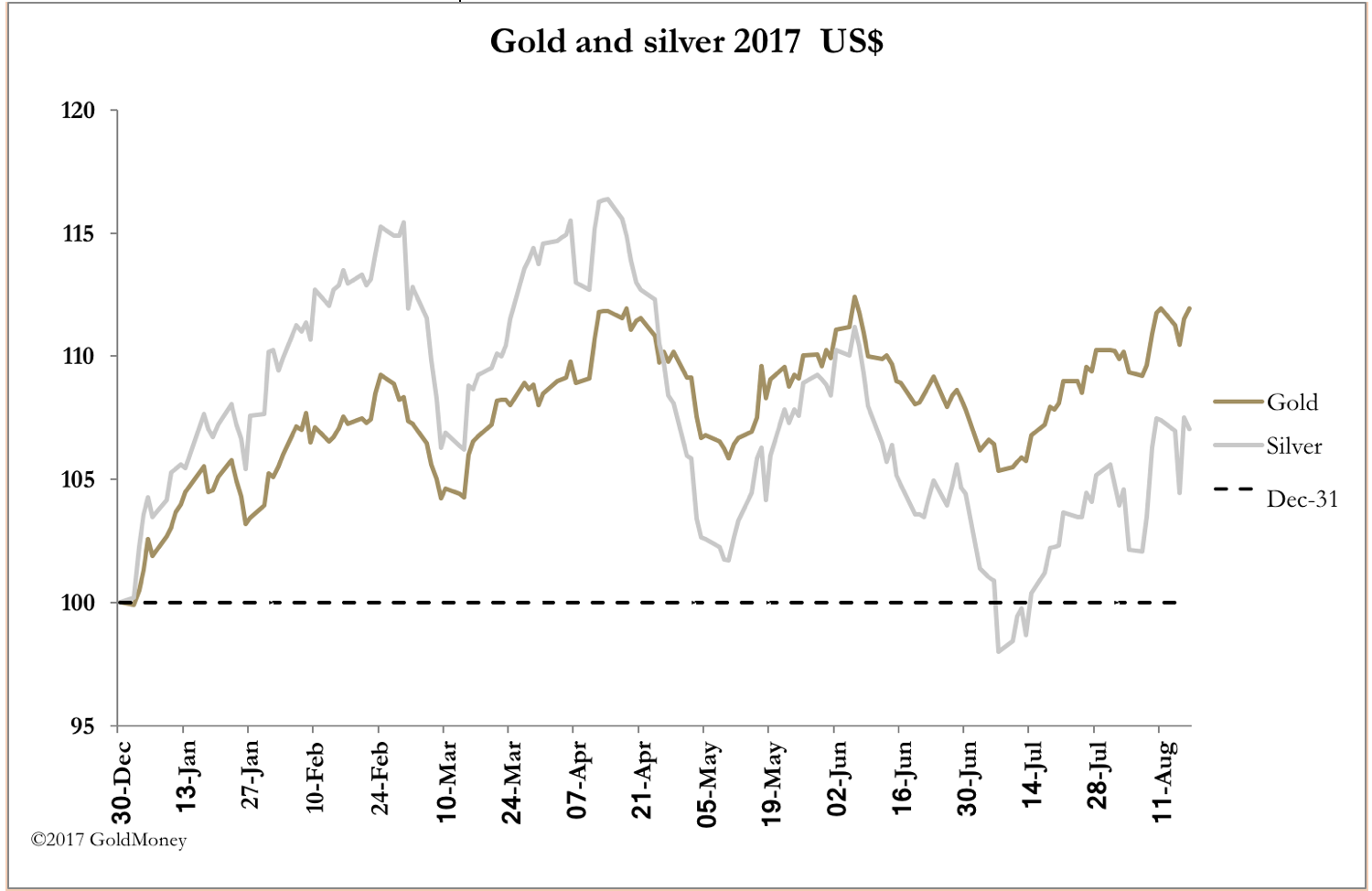 Having had an excellent run last week, gold and silver have consolidated by initially falling on Monday and Tuesday this week, before rallying back up to the highs on Wednesday and Thursday. In early European trade this morning, gold was up $6 on last Friday’s close at $1294, and silver up 10 cents at $17.15.

The principal driver of precious metal prices has been the US dollar, which after a prolonged bout of weakness, culminating last week on fears of war with North Korea, had a sharp relief rally on Monday and Tuesday.

The underlying strength of the gold price is beginning to show priced in the other major currencies. This is shown in our second chart. 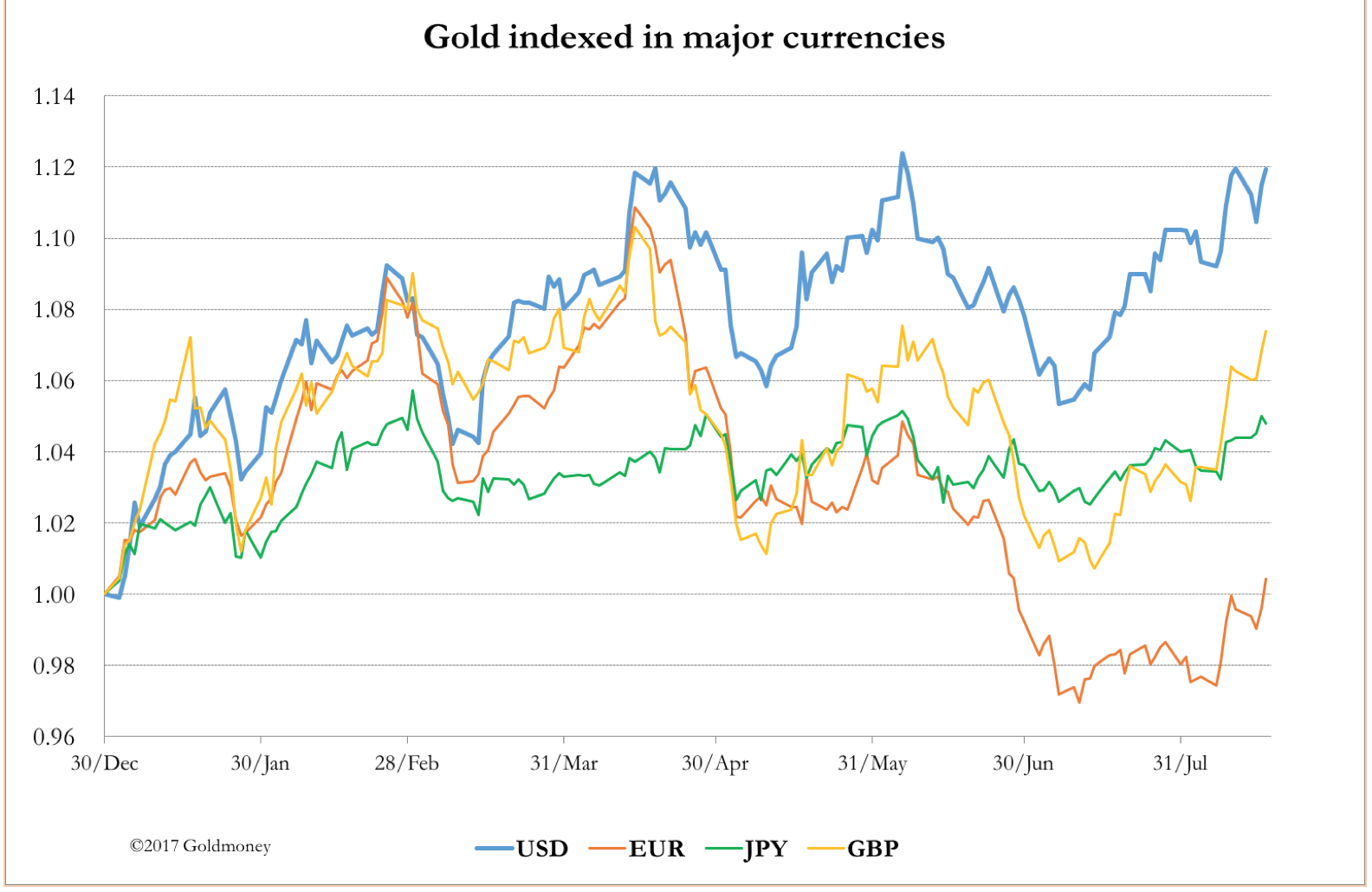 Priced in sterling, gold managed a close last night (Thursday) above £1000, moving in on the highs of early June. Priced in euros, gold is now up on the year – just. So, while for Americans it’s a dollar-hedge story, for those whose base is in other currencies, gold is showing some encouraging underlying strength.

All this points to the possibility that gold is mounting a successful attack on the psychologically important $1300 level. And our third chart, including the principal moving averages watched by traders, also gives cause for optimism. 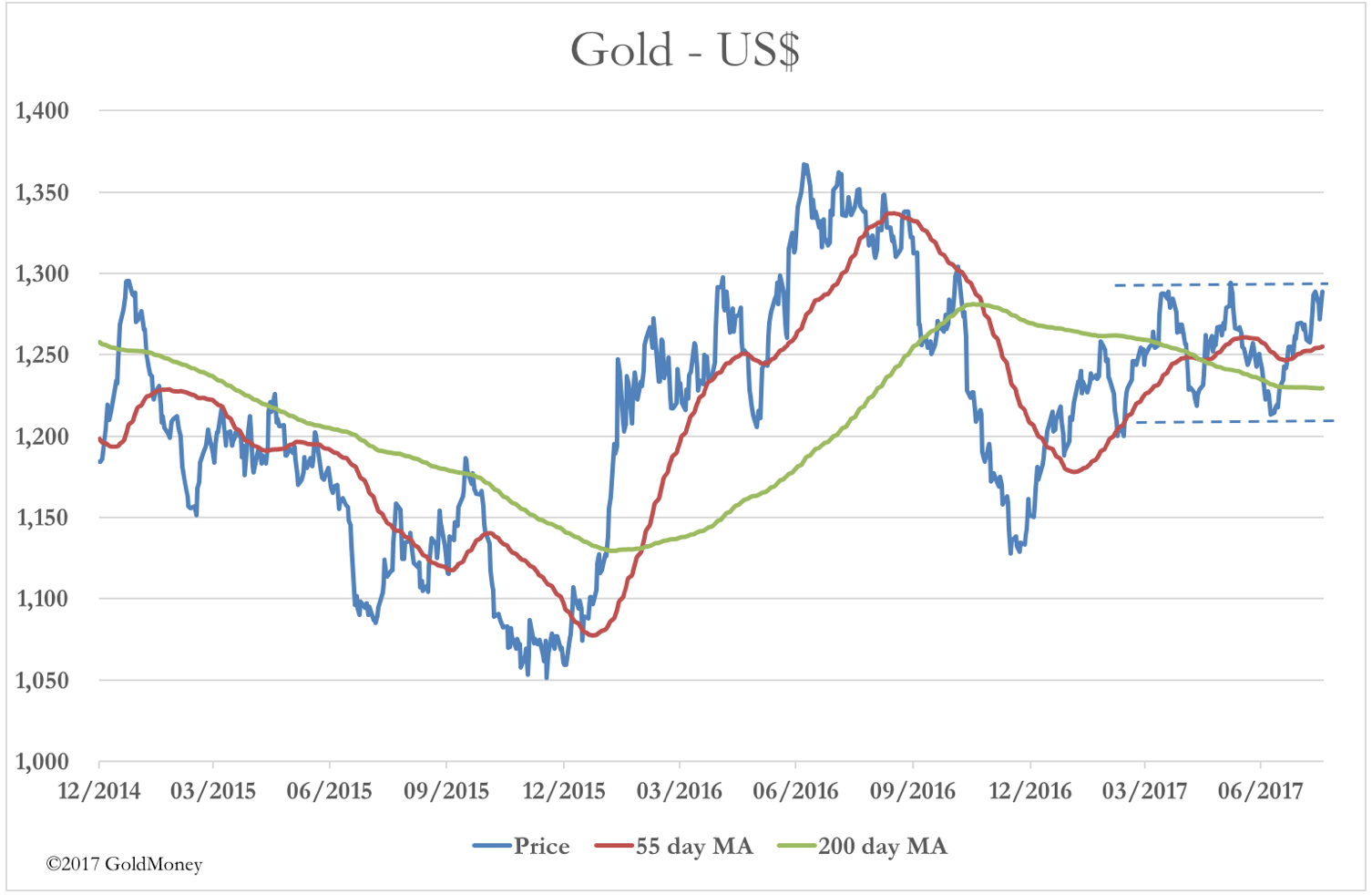 So far, gold appears to have been in a consolidation pattern, shown between the dotted lines. The question today is whether the gold price will have another dip towards the lower bound at $1210, or whether this third attempt will succeed. The price and moving averages are now in bullish formation, indicating the balance of probability is the challenge to $1300 will succeed, in which case $1350-1400 becomes the next technical objective.

The fundamental background appears supportive as well. While the immediate concerns over North Korea have thankfully subsided, it became clear this week that America’s attention will turn to trade, attacking China. Steve Bannon, the White House Chief Strategist in an interview with The American Prospect, made it clear that it was a battle for global hegemony between America and China, and that America had to act soon to prevent China dominating the world in twenty years’ time.

Two things stand out: it is no longer a question of China having an unfair trade advantage, trade is now centre-stage for a geopolitical war. And Bannon is obviously confident America will win.

We cannot at this stage predict the outcome, but a trade and financial war will come at considerable cost to America. Furthermore, America is now less than 25% of global GDP, and because it has a large internal market, its foreign trade is even less significant. Her principal weapon is the dollar as reserve currency, but markets are still awash with them from all the post-crisis monetary expansion.

If it comes to a financial and trade war, we must not forget that China has substantial amounts of dollars and gold, which she can use to drive the dollar lower. Bannon ought to bear in mind the adage, those in glass houses shouldn’t throw stones.

However, there is a strong possibility that Bannon’s financial battle with China will escalate, as Trump’s embattled presidency needs a foreign enemy to distract from domestic issues.