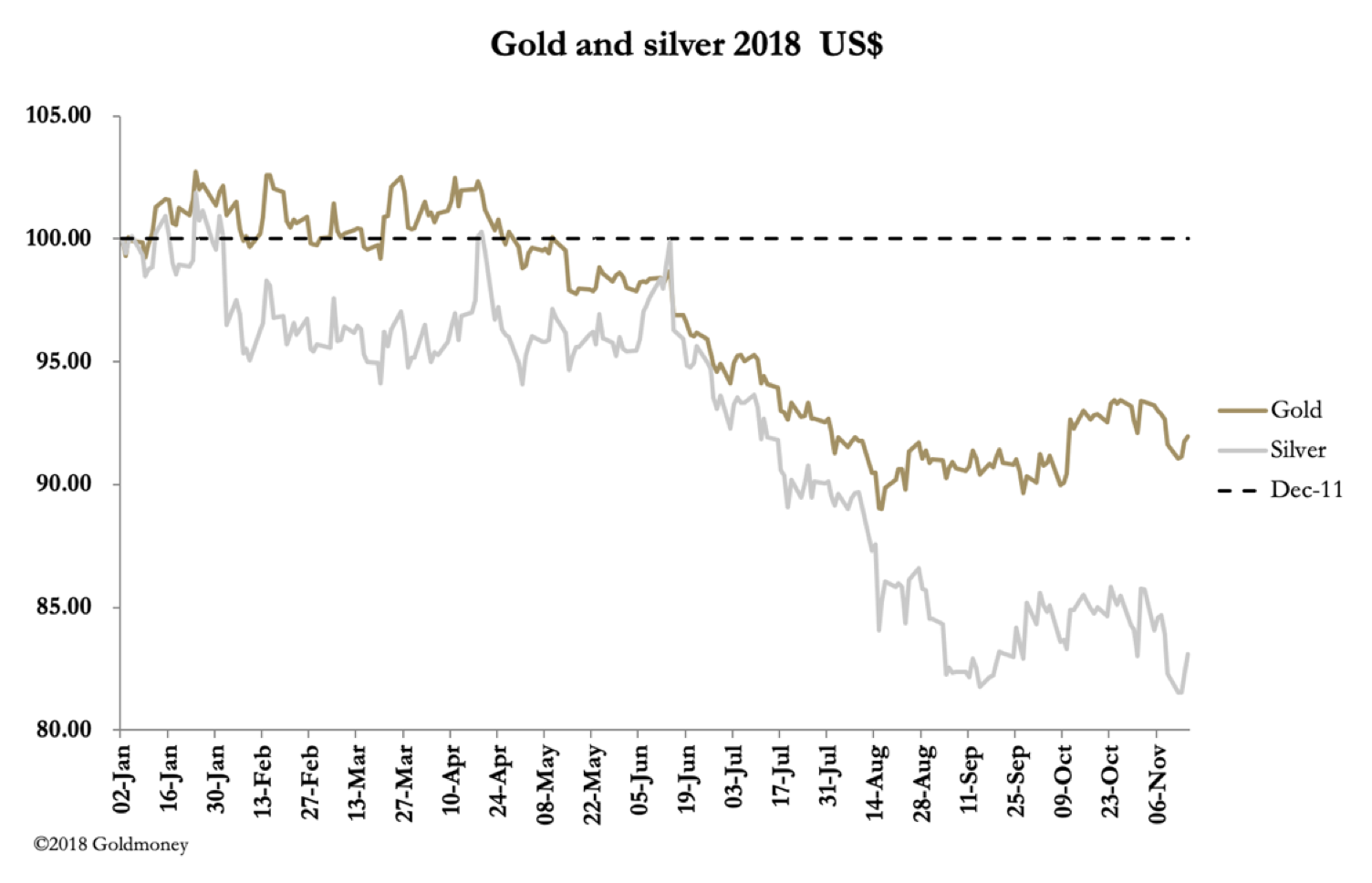 Both metals remain very oversold, but the sell-off early in the week coincided with a strong dollar, which entered new high ground for the current rally, before retreating. This is our next chart. 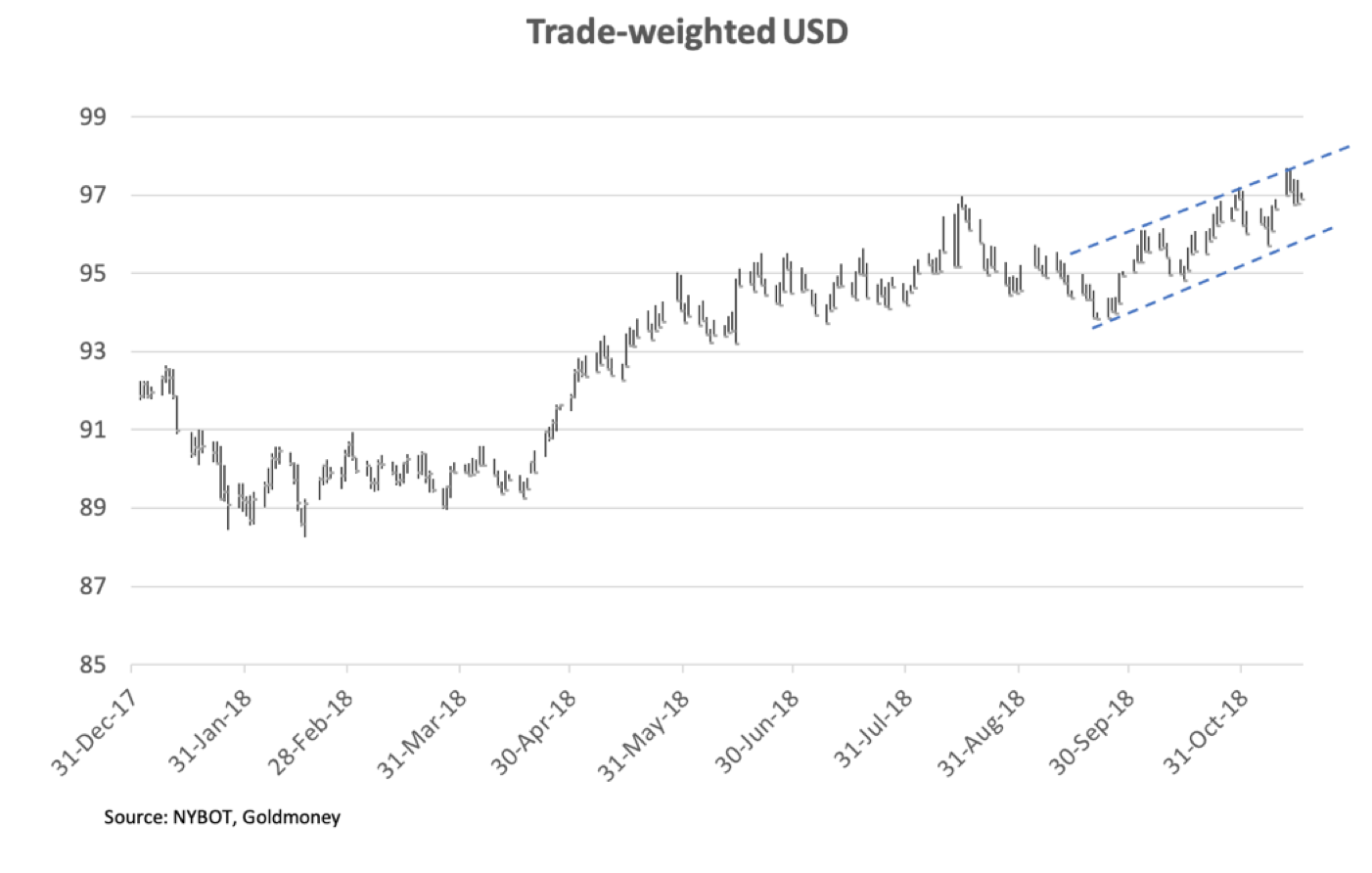 For the moment, the dollar’s TWI is contained in a bullish channel shown by the pecked lines. A break below 95.6 (96.89 currently) would signal the rally is over for the moment.

This could be caused by signs of a trade negotiation between America and China bearing fruit. For the moment, there are conflicting signals from the US side, but there is pressure to make progress ahead of the G20 meeting on 30 November. If an agreement is reached, we can expect the Yuan to recover sharply, and for the dollar to weaken. It would almost certainly spark a decent rally on Wall Street and attract favourable comments from US businesses. These are likely to push Trump’s buttons more than continuing with his isolationist stance.

It would be too early to forecast a significantly lower dollar, because the real problem is the euro. Euro interest rates are far too low relatively, and with Germany’s motor industry facing a downturn, the ECB is unlikely to tighten policy.

But at least the prospects of a weaker dollar in the short-term could encourage a bear squeeze. This coincides with a seasonal factor. Every year since 2013 gold has made a bottom in December. Subsequent rallies into January and beyond averaged 18%, which would take gold to about $1400.

Why the repetitive pattern? The answer is a combination. First, the December contract is the last active gold contract on Comex for the year, the next being February. This often leads to selling pressure in late November as the bulls face a choice of closing positions or rolling them forward. This can lead to a rally in December if Comex contracts are oversold, as is the position today. This time, hedge funds are so short we may have seen the low-point already.

The second factor is year-end book-squaring. Hedge funds which are short on Comex will tend to close or reduce their positions. Traders at the bullion banks will want to maximise their profits, and at the same time minimise their exposure. In practice, this means they can show reasonable bull positions but are likely to reduce their bears. The net effect is they tend to be buyers at the year end, or if they are long, they will try to maximise profits on a mark-to-market basis.

This is where our last chart is relevant, being a measure of the squeeze potential on the hedge fund bears. 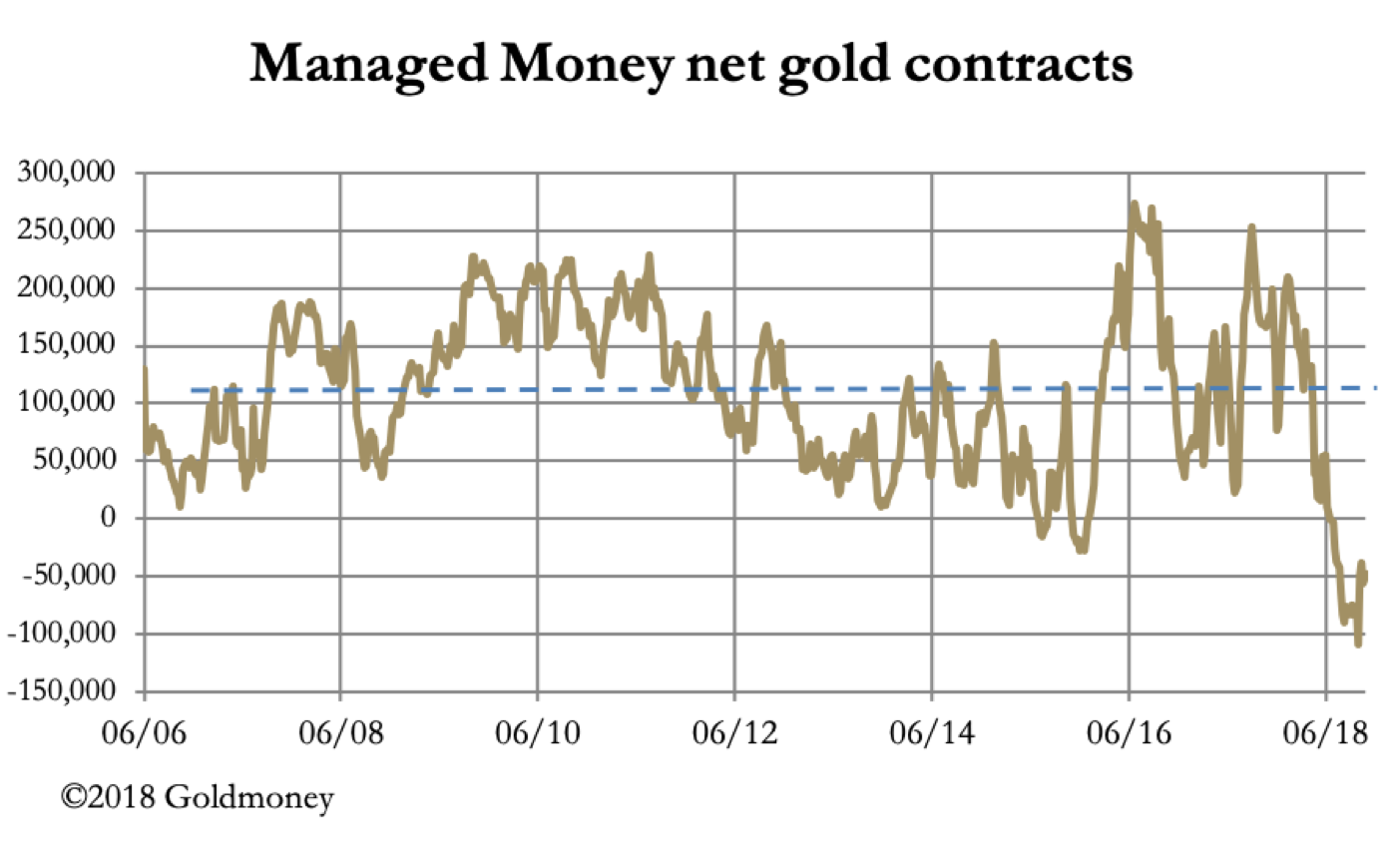 This Comex contract is still record oversold. We will have an update tonight, but the action earlier this week is likely to confirm net shorts of over 50,000 contracts. The technical position supports a repeat of the December rally. If, as seems likely, China and the US can defuse trade tensions, then the set-up looks increasingly positive for gold and silver.