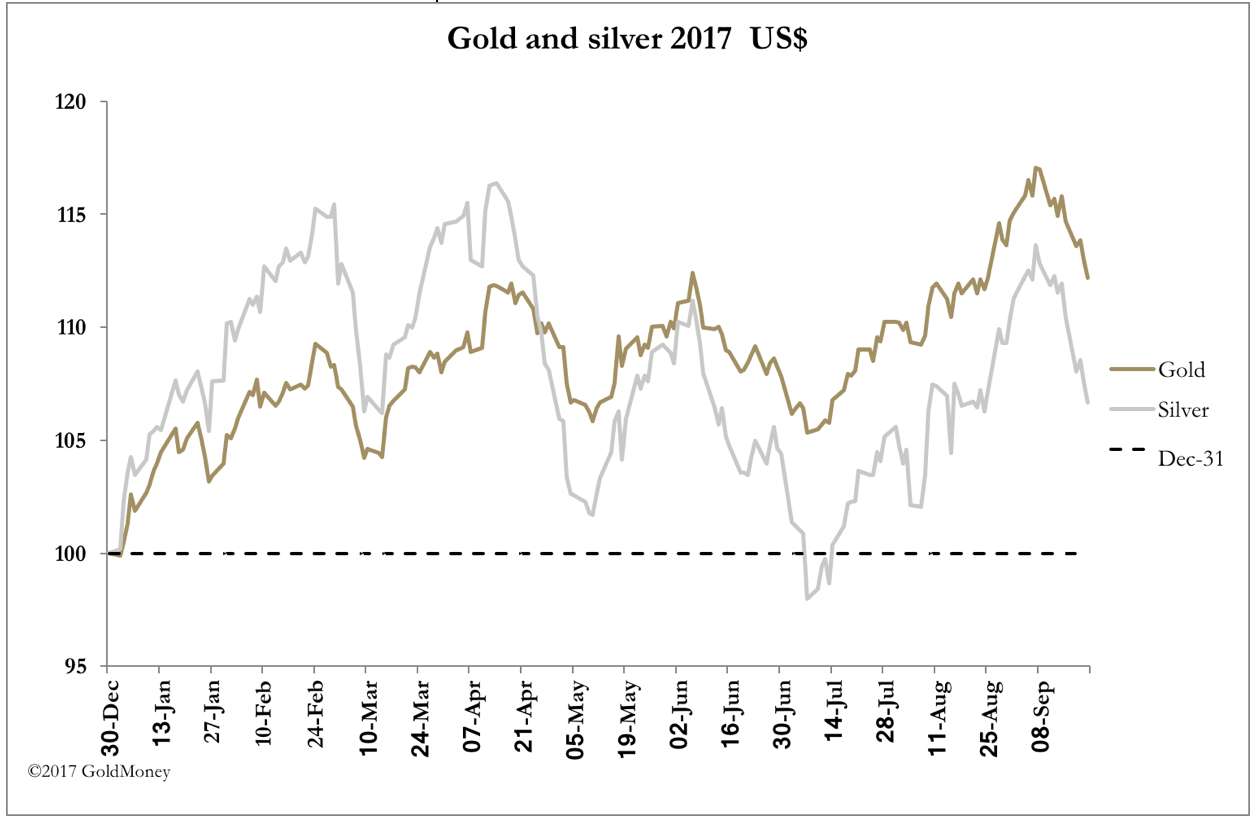 Gold and silver were sharply down this week, with gold off $23 at $1297 from last Friday’s close in early European trade early this morning (Friday), and silver off 56 cents at $17.03 on the same time scale. As can be inferred from our introductory chart, this extends the losses for both precious metals since their peaks on 7th September.

Gold and silver had become overbought, as discussed in previous market reports, so a reaction was only to be expected. However, the falls so far do not appear to have changed the overbought condition much, particularly in the case of gold, illustrated in our next chart of open interest on Comex.

Since the peak earlier this month, OI has fallen only 13,951 contracts, and 11,201 of those were unwound yesterday (on preliminary figures). This suggests there is more of a shake-out to come. Our next chart is of the net long position of the managed money category. 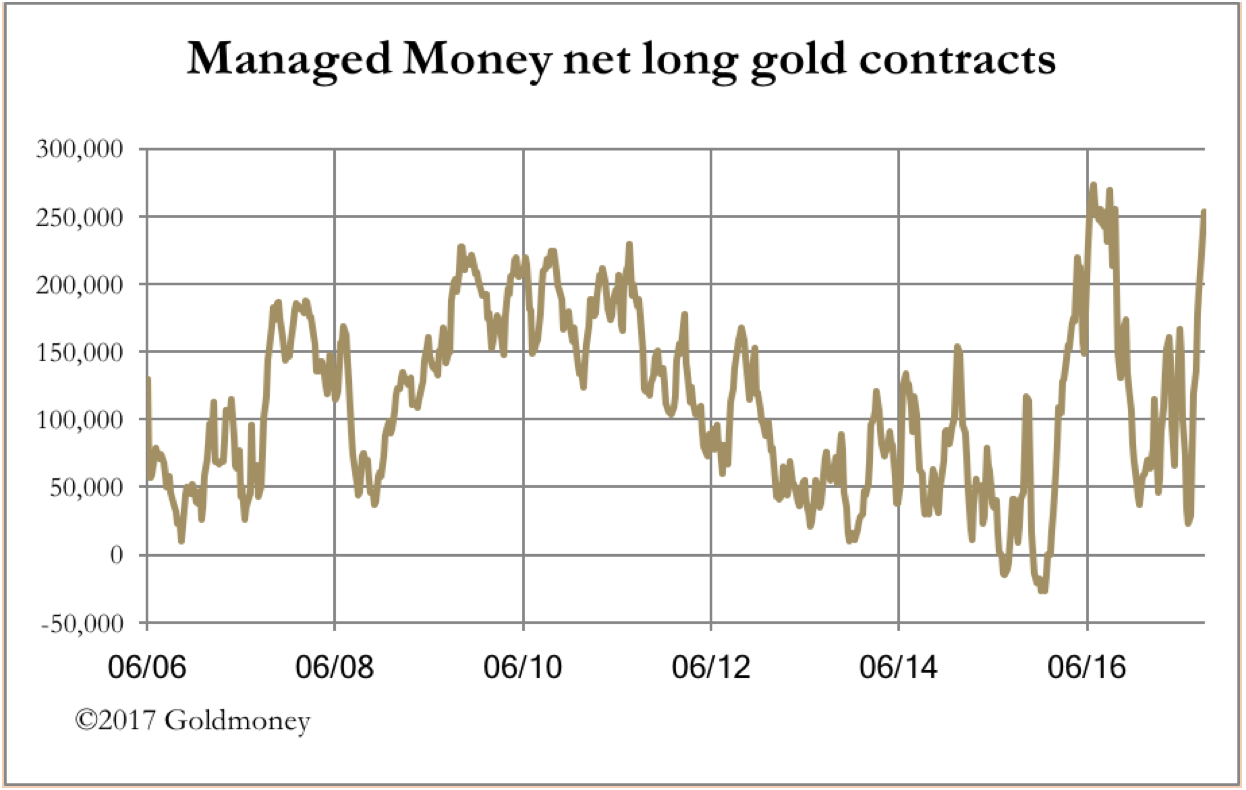 This includes the most recently available data at the time of writing, 12 September, but the figures for last Tuesday to be released after the market closes tonight are likely to show a more overbought condition for this group of speculators, challenging similar levels seen a year ago.

This suggests there are still too many flaky bulls on Comex, vulnerable to the actions of the bullion banks designed to take out stops. On the plus side, the active contract is December, which lessens the pressure on those prepared to top up their margins on further calls.

All this is of course dependent on control of the gold price remaining with Comex. Our next chart attempts to identify the level at which more solid physical buying might be realised. 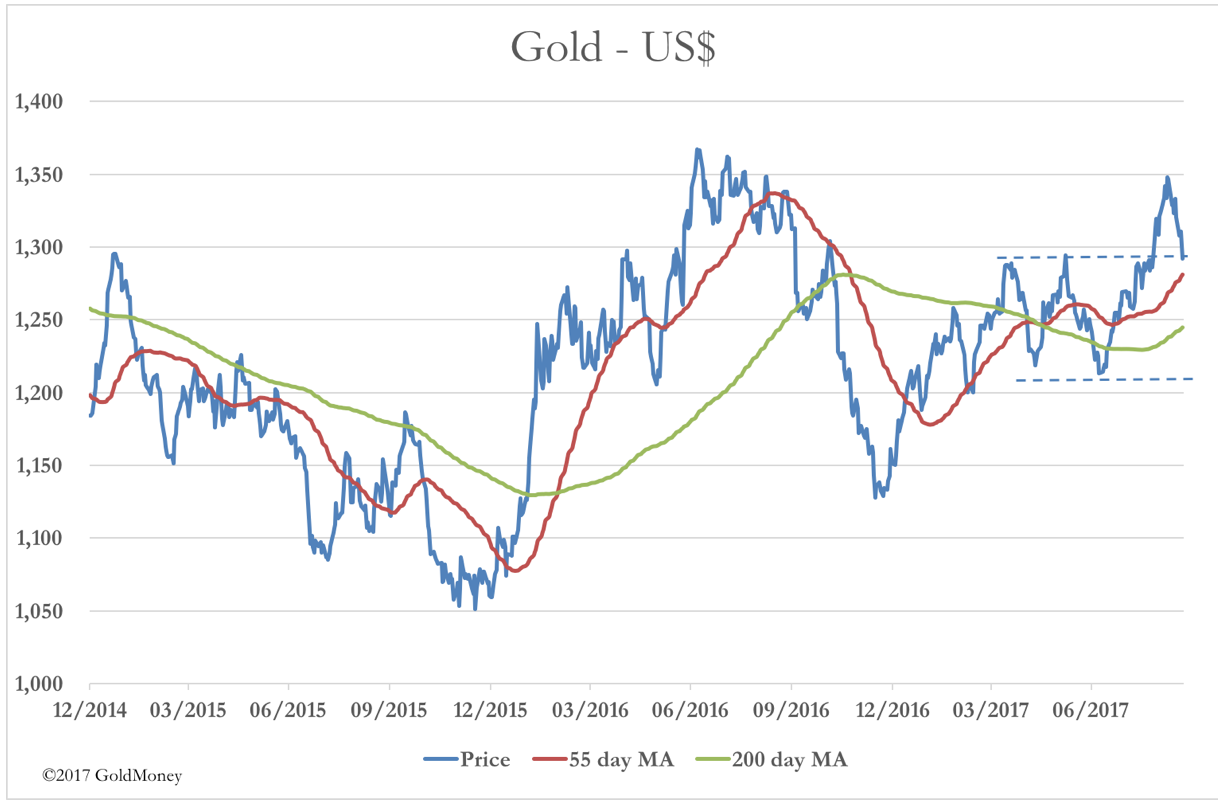 And here, we can see that there appears to be solid support in the $1280-1300 range, an important level going back to the beginning of this chart in early-2015. So, while the technicals on Comex look awful, bulls can take some cheer from the likelihood of increased physical buying emerging from current levels.

The dollar itself has had a mixed week, gaining nearly 1% against the yen, but down against sterling, which has rallied to levels last seen just after the Brexit referendum result. These moves are reflected in our final chart, of gold in the major currencies this year. 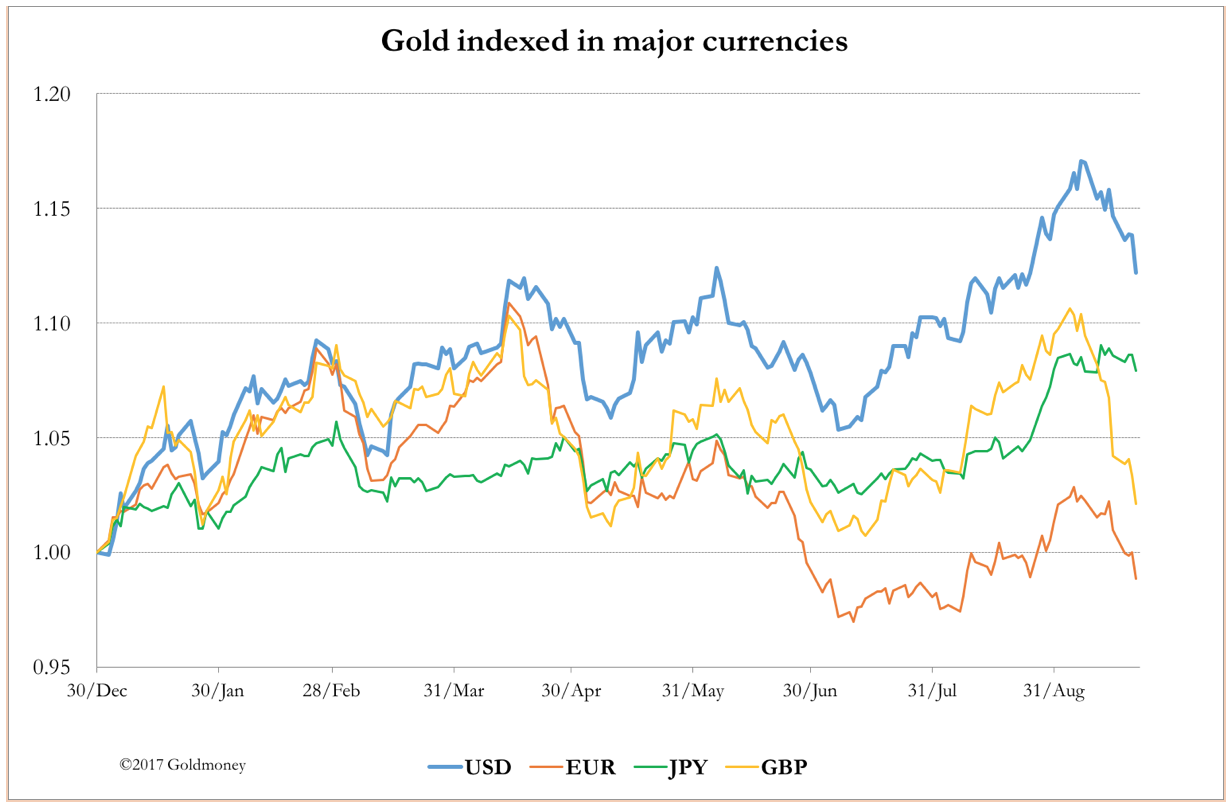 The general chatter is the dollar is due a rally, and when Ms Yellen of the Fed announced on Wednesday a gradual reduction in the Fed’s balance sheet from October onwards, it was taken as a cue to knock the gold price. However, this is non-news, and any idea that it represents unexpected monetary tightening can be dismissed. Other than some short-term consolidation for the dollar, there’s nothing to prevent it resuming its downward track.

The US economy is isolated from the world’s growth story, which is centred on China. The bullish currency story is with the euro, where the ECB is likely to be forced into a dramatic change in monetary policy, due to unexpected growth throughout the Eurozone. Current negative interest rates and bond yields (the 2-year German Schatz yields -0.68%) are wholly inconsistent with a German economy that’s accelerating rapidly.

There’s a simple rule: euro up is the same as the dollar down.