For those who either invest, trade, or save in precious metals, the past month has not been kind to the value of their holdings.  And in fact, sentiment against gold and silver ownership because of the volatile price swings has really been forged over the course of about six years going back to 2011 when each were crushed by manipulation when they were sitting at their all-time highs.

But to understand the gold market one must understand how its price is tied not to the physical metal itself, but to paper derivatives traded daily on the Comex.  And more importantly, why both the futures market and the regulators allow the bullion banks to sell contracts in which they do not have the actual gold to backstop these trades.

In essence it comes down to two simple and desperate needs… the first is to protect the dollar, and the second is to protect the trillions of dollars worth of derivatives held by the banks which would result in the complete implosion of the Western banking system.

As you can see in the 10-year chart of the dollar below, in 2011 the reserve currency was on the brink of collapsing as it fell below 73 and the last maginot line of support. 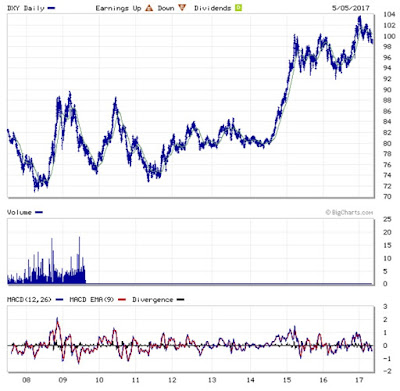 And like in 1980 when trust in the dollar was at a previous crossroads, gold and silver were the few assets that individuals could go to for protection against inflation and the collapsing currency.

Former Fed Chairman Paul Volker stated after he saved the dollar by raising interest rates to over 20% in 1981 that the one thing he wished he had done in his process was to manipulate the gold and silver price.  And that lesson was carried over to 2011 when the Fed formulated a program to manipulate and control the price of gold in tandem with their programs of QE which would introduce 10’s of trillions of dollars into the monetary system. 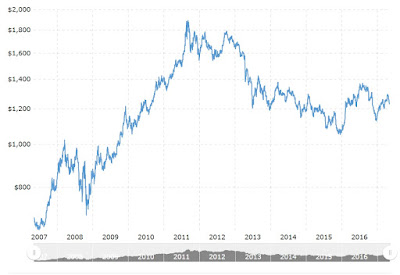 Unlike from 1980 to around 2002, when the price of gold remained relatively low in the mid-200’s due to the exuberance of the Dot Com stock market frenzy and the lack of sentiment in the precious metals, gold demand since 2008 has remained fairly strong and fairly constant, requiring the bullion banks at the behest of the Fed to continuously push down the price using derivatives and naked shorts.  But in doing so what they have also done is create a leverage so vast that according to well respected metals analyst Andrew Maguire, that leverage is now at 500/1 paper contracts to every physical ounce.

As an example, at the BIS (Bank for International Settlements) opex expiry at 3pm UK time on the 30th of April, it was clear by the footprints that they were grossly offside on trillions of dollars worth of derivative positions which they were forced to defend. Anyone doubting that officially transacted BIS gold derivatives exceed $1 trillion, need look no further than their agent banks’ OCC positioning and add this to the Reserve Bank of India’s estimation that there is 92/1 leverage. However, this conservative estimate does note include related derivatives which estimate leverage to be (a staggering) 500/1. – King World News

Owning physical gold and silver is not a short-term trade scenario, but protection for your wealth over a long period of time when the natural cycle of booms and busts, or the collapse of a currency via inflation or loss of confidence, reaches its inevitable outcome.  And just like the way cheap money has artificially propped up stocks, bonds, housing, and other assets, when they eventually break, just as they did in 2008, the collapse of each of these will be horrific, and even greater than the 60% drop we saw in prices between 2008 and their bottoming out in 2010.