Over the week, gold and silver ended up little changed, having rallied strongly on Monday, and drifted thereafter. Gold was unchanged from last Friday’s close to stand at $1325 in early European trade this morning, and silver 3 cents lower to stand at $16.32. Volumes on Comex were notably subdued in both contracts following the Easter break. 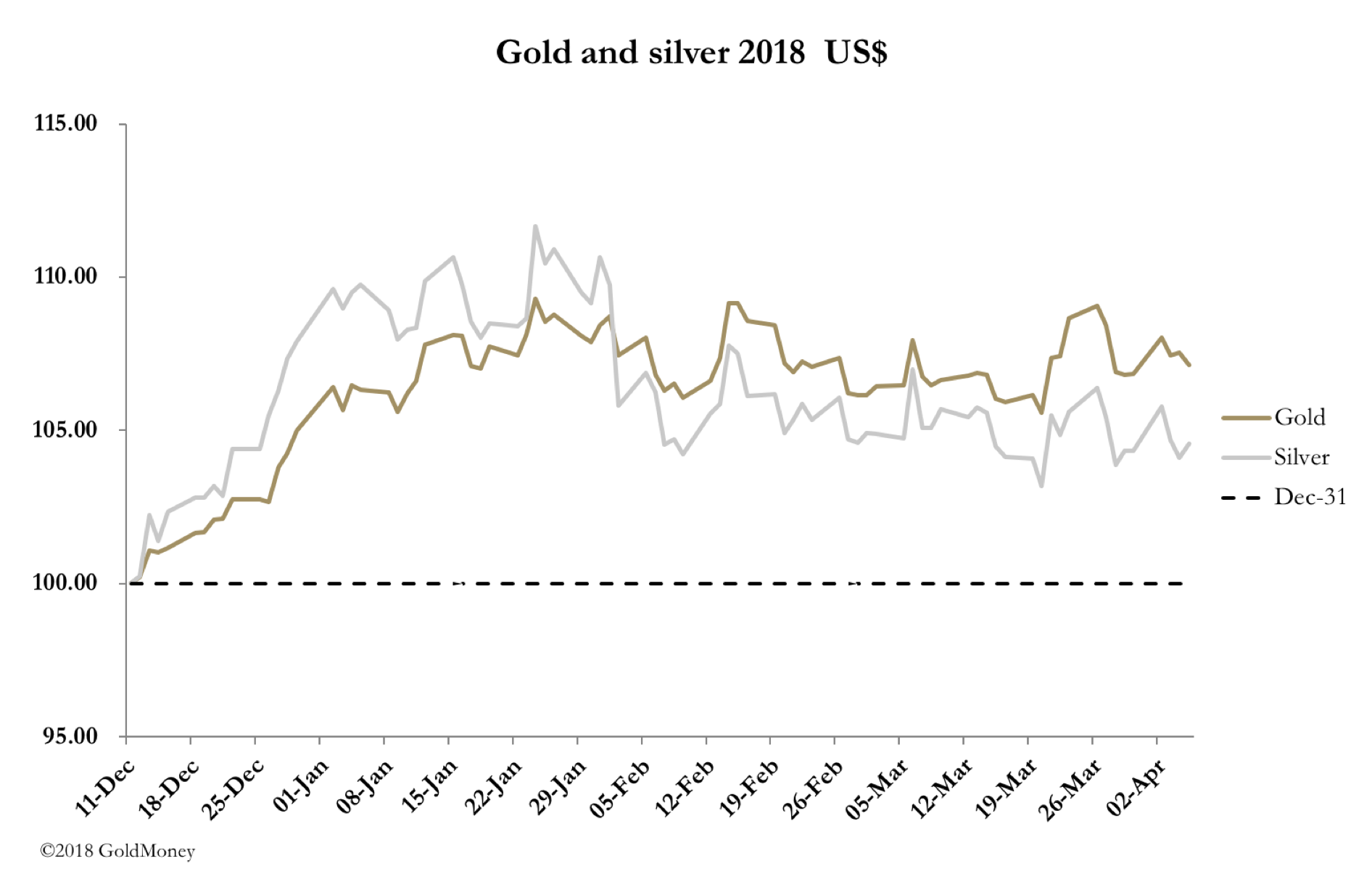 In the background, the dollar’s rally has continued, with its trade weighted index rising about ½% over the week, not enough to derail gold, but enough to keep aggressive bulls of gold at bay. Extreme volatility in equities has not been enough to excite gold either, despite a developing trade war between America and China being the cause.

There is a feeling in financial markets that, with US money supply appearing to stall and equities on Wall Street showing signs of entering a bear market, economic growth may be slowing. If this is the case, then the inflation threat will be deemed to diminish as well. Whether this is right or wrong, only time will tell, but there is little doubt that the change in sentiment is affecting base metals prices, including silver.

Silver has become so oversold as to be ridiculous. Hedge funds have record short positions and have been increasing them on every sign of price weakness. We await to see the Commitment of Traders Report after-hours tonight for further confirmation, but meanwhile we can see the effect on Comex open interest relative to the price. This is our next chart.

Open interest has shot up to an all-time record, while the price has been oscillating in a tightening band since December 2015. From a technical point of view, we are witnessing an assault on the price, which appears to be failing to push it below $16. The reason silver is underwritten is connected with the accumulation of physical silver on dips by JPMorgan, having amassed 141 million ounces in Comex vaults. This is 16% of global mine output annually. Why is JPM doing this?

I have a theory that they are accumulating silver on behalf of China. China uses more silver than any other nation, considerably more than she mines herself. Some she imports in the form of doré, but she still needs to buy silver in the markets. Furthermore, the forward planners in China are likely to expect increasing requirements for silver in future, along with other base metals.

It is in her interests therefore to accumulate silver reserves. A plausible explanation for JPM’s accumulation of silver is that the bank has been tasked by China to acquire physical silver on Comex. If this is the case, it also explains why, despite all the short selling by bearish hedge funds, the price refuses to go lower. The key will be to see if silver makes $17+, at which point we can expect a massive bear squeeze on hedge funds, who presumably think declining equities are indicative of a new recession, a stronger dollar, and therefore lower demand for silver.