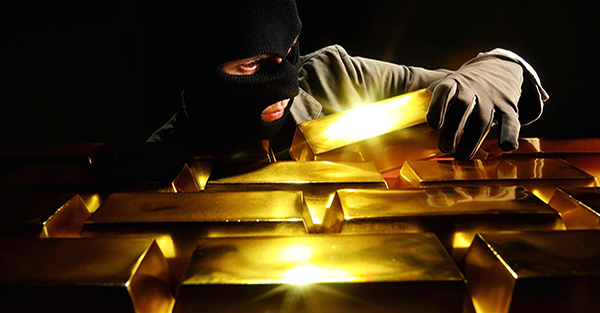 In 524 BC, a group of pirates set sail for Sifnos, an ancient Greek island famed for its vast gold and silver mines.

The mines of Sifnos were unparalleled in the ancient world.

They produced so much gold and silver that the local government at Sifnos could erect countless monuments, invest in new public works, and still easily have a substantial balance remaining at the end of each year to distribute to the citizens.

When the pirates arrived, they robbed the island of 100 talents of gold, an unfathomable sum at the time.

In the ancient world, a talent was a unit of weight equivalent to 26 kilograms, or about 836 troy ounces.

So 100 talents of gold would be worth just shy of $100 million today, ranking that ancient robbery as one of the biggest heists in history.

It’s amazing that thousands of years have passed, and yet that very same gold could still be traded in modern financial markets.

There are few other assets on the planet that have had such a long history of value, durability, and marketability.

Gold very clearly holds its value over time, whether over decades or millennia.

Now, in fairness, it’s not like any of us is going to live for 2500+ years, so realistically it shouldn’t matter if our money will maintain its value until the year 4500.

But gold has plenty of other benefits. For example, it’s also a type of insurance.

If there’s ever a major problem with your home country’s currency or monetary system (which we’ve seen over the last several years from India to Iceland, Argentina to Zimbabwe) gold will maintain its value and survive the currency crisis.

Owning some physical gold will ensure that you still have something of value in your pocket.

This is an insurance policy that you hope you’ll never need. But if you ever do, you’ll be damn glad you have it.

Another type of insurance policy we’ve discussed in this letter is physical cash.

Most people keep the vast majority of their savings in a bank, and in normal times we can access this savings online, at ATMs, and in the checkout line with our debit cards.

We view physical cash and bank balances as the same thing, i.e. $1 in a savings account is the same thing as a one-dollar bill with George Washington’s face on it.

They’re not the same thing. These are actually two distinct forms of money, they just happen to have a 1:1 exchange rate right now.

Your bank balance is nothing more than an accounting entry on a bank’s ledger.

It’s a technically a claim– an amount that the bank owes you, one of its millions of unsecured creditors.

And if there are ever any major problems at the bank, you’ll quickly see how worthless this claim can be.

Think about what happened in Cyprus back in 2013. An entire nation woke up one morning and found out that the government had frozen every account at every bank in Cyprus.

It turned out that the entire Cypriot financial system was near collapse, and the government cut people off from their funds in order to protect the banks.

At that point, bank balances were fundamentally worthless. It didn’t matter how much money you had in the bank… you couldn’t do anything with it.

But anyone who was holding physical cash could still buy food, fuel, and other necessities until the crisis subsided.

The 1:1 exchange rate between cash and bank balances broke down, literally overnight.

One day everything was normal. The next day, cash was far more valuable than anyone’s bank balance.

This is why it makes sense to hold both– gold AND physical cash.

It’s perfectly fine to stay optimistic and hope for the best. And there’s plenty to be optimistic about.

But with bank insolvencies rising (especially in Europe) and a US debt level closing in on $20 trillion, does it make sense to bet everything you’ve ever worked for on hope and optimism?

We insure ourselves against all sorts of risks.

Those risks may be extremely low. But they’re important enough that we spend money to protect ourselves against them.

The systemic risks we’re talking about may also be low. (Though I would suggest the risks are much higher than anyone realizes…)

But their impacts are extraordinary.

Yet unlike conventional insurance, these policies, i.e. cash and gold, don’t really cost anything.

Gold prices may fluctuate from day to day, but over the long-term, the metal holds its value. And it’s an asset that you’ll be able to sell, worldwide, in an instant.

It’s the same with cash.

With interest rates at historic lows and a checking account yielding 0.1%, there’s virtually no opportunity cost in holding some physical cash versus keeping all of your savings at the bank.

These are no-brainer solutions with minimal (nearly zero) cost that provide time-tested insurance against some obvious risks.

Do you have a Plan B?

If you live, work, bank, invest, own a business, and hold your assets all in just one country, you are putting all of your eggs in one basket.

You’re making a high-stakes bet that everything is going to be ok in that one country — forever.

All it would take is for the economy to tank, a natural disaster to hit, or the political system to go into turmoil and you could lose everything—your money, your assets, and possibly even your freedom.