The Great Precious Metals Market Disconnect that took place four years ago is now a ticking TIME BOMB.  While the Fed and Central Banks have been relatively successful in propping up the broader stock, bond and real estate markets, time is not on their side.  The more the highly inflated markets continue higher, the more breath-taking will be the inevitable collapse.

Now, I am not just pandering hype here, there is plenty of data to support the evidence that the precious metals suffered a serious disconnect from the broader markets in 2012 and continue to be held down like a coiled spring.  One of my readers forwarded me this excellent chart which shows this perfectly:

While many precious metals investors realize that this disconnect took place, this chart shows it with more precision.  Furthermore, if we look on the right side of the chart we can see the percentage level of this disconnect is 65%.  This is off definitely off the charts… literally and figuratively.  Again, I appreciate my reader for forwarding this chart. 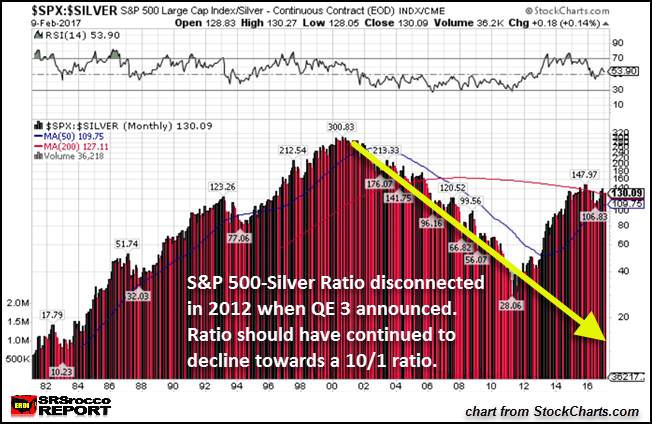 If we applied the same 1981 S&P 500-Silver ratio today, the price of silver would be $230.  That being said, the value of the S&P 500 is severally inflated.  So, it is difficult to determine a realistic silver price based on a highly inflated stock index.

Regardless, the YELLOW ARROW in the chart shows that the S&P500-Silver ratio should have continued lower, not higher towards the 130/1 ratio it is currently.  Unfortunately, the precious metals were not allowed to be apart of this GREAT INFLATION because there just isn’t enough physical metal to go around.. if the public started buying hand over fist.

Market Volume Indicating Something Is Really Wrong With The Markets

Not only have the precious metals disconnected from the broader stocks markets (shown in the first chart above), if we look at the volume at the S&P 500 and the silver price, we can spot another troubling sign: 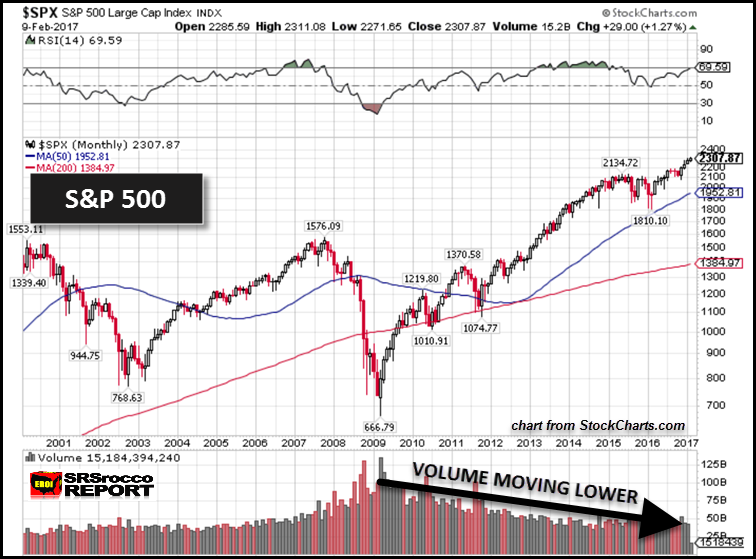 After the S&P 500 hit its low of 666 points in 2009, overall trading volume continued to decline.  While I have mentioned this before in a previous article, I have looked at this trend in a different way.  We must remember, a healthy stock or index rises along with its trading volume.  This is precisely what took place with the S&P 500 from 2000-2009.  However, the opposite has taken place since 2008-9, when the U.S. financial system suffered a severe heart-attack.

Now, if we look at the Silver price chart, we see a much different picture: 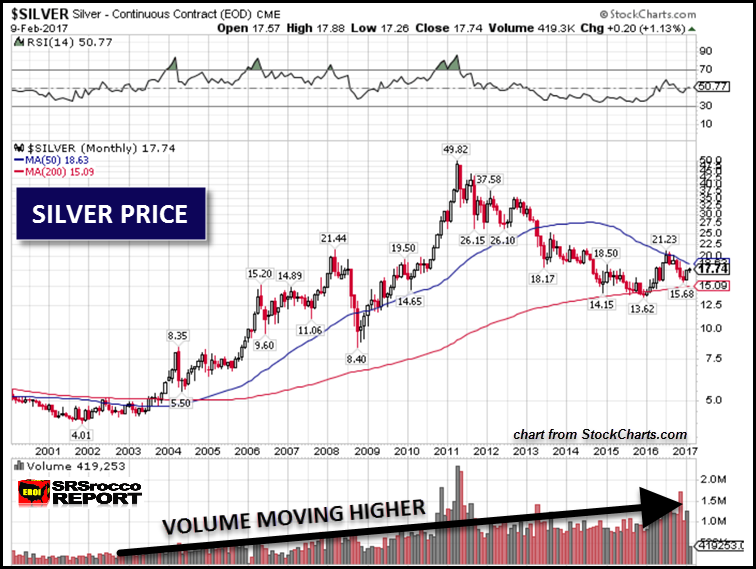 As the silver price trended higher since 2000, so did its trading volume.  While its trading volume spiked in 2011 (along with the price) and the fell lower, its overall trend has been higher.  Again, this is nothing new, but what I realized is this important factor:

Basically, the S&P 500 Index is moving higher on lower and lower volume, thus INFLATING its value.  Now compare that to the Silver price which is being DEFLATED by an increasing amount of paper trading contracts.

Yes, it is true that a Future’s Market was designed to properly hedge producers and buyers of commodities, metals and energy.  However, gold and silver do not behave like most commodities that are consumed.  Gold and silver also perform as monetary assets or stores of value.  By increasing the paper trading volume of gold or silver, it diminishes its role as a monetary or store of value asset.

Of course, this is being done on purpose.  While the Fed and Central Banks continue to prop up the broader stock, bond and real estate markets with money printing, debt and derivatives, the ENERGY that they are relying upon to continue BUSINESS AS USUAL, is in serious trouble.

If you have not read my article, THE BLOOD BATH CONTINUES IN THE U.S. MAJOR OIL INDUSTRY, it provides clear evidence that the big U.S. oil companies, ExxonMobil, Chevron and ConocoPhillips are going into serious debt to pay for capital expenditures or pay shareholder dividends.  This is not a business model that is sustainable in the long run.  Something is going to give… and in a BIG WAY.

The Great Precious Metals Market disconnect is a ticking TIME BOMB.  Even though it is impossible to forecast when the bomb will go off, logic suggests the S&P 500 will head LOWER, while the price of silver (and gold) will head HIGHER.