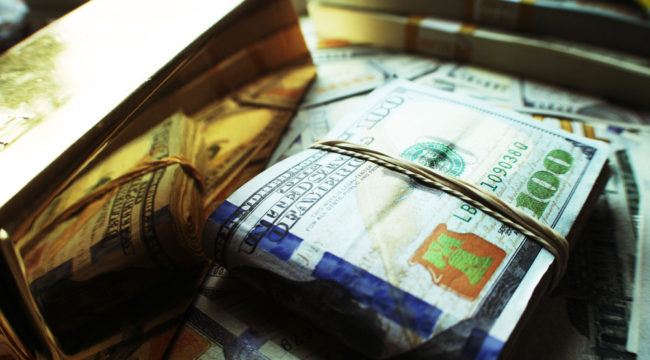 I’m very impressed with the recent gold action because it’s holding its own in the face of an impending rate hike. It’s fallen off a bit, but not dramatically. It tells you there are good fundamentals behind it, independent of the threat of a stronger dollar.

I believe the Fed is preparing to raise into weakness and will have to reverse course in April or May. What happens to gold then? It’s going to go higher again, because the Fed will cheapen the dollar, and that’s very bullish for gold. So I expect gold to take off in the spring and finish the year very strongly. It could challenge $1,300 or $1,400.

I want to give the basis for that forecast. I never give any forecast without giving the analysis behind it. Anybody can pull a prediction out if a hat. If you don’t have the analysis to back it up I’m not interested.

So let’s go through the math, because there is a solid mathematical basis for $10,000 gold. It’s actually the implied non deflationary price of gold under a gold standard.

The combined M1 money supply in the world is about 24 trillion dollars. That includes the United States, China, the Eurozone and Japan. Those four entities combine for over 70% of global GDP.

Now, the official gold in the world is about 33,000 tons. That’s not counting private gold, because private gold is not part of the money supply.

So if you wanted to restore a gold standard, how much gold do you need to back up the money supply? My estimate is about 40%.

I use the higher number, 40%, because I think a higher number might be needed to restore confidence in event of a collapse. The point is, 40% is a debatable, but reasonable figure.

That’s because I expect central banks to print a lot more money by the time this issue comes to a head. So, by the time the printing presses stop running around the world, that $9,000 number will likely be in the range of $10,000.

The point is, $10,000 an ounce is not pie in the sky. It’s not a number I pulled out of a hat to get headlines. It’s the actual mathematical implied non deflationary price of gold. If you reintroduced a gold standard at a lower price, it would be deflationary. They’d have to reduce the money supply in order to bring it into alignment with the price of gold.

So I expect $10,000 is where gold will have to be, given the amount of official gold and the projected amount of printed money to give it 40% gold backing.

That’s the basis of my forecast. It’s rooted in history and sound monetary management. It’s rooted in simple mathematics. If anything, the number’s probably going to go higher. A year from now, that $10,000 figure might be even higher.

This is important because gold maintains a prominent place in the international monetary system, despite what elites say.

If gold is not money, if gold is not part of the monetary system, if gold is just a commodity that people trade, my analysis wouldn’t apply. But I believe that gold is money, and it always has been.

Gold has always been at the base of the international monetary system. To a certain extent it still is, whether or not central banks or the elites want to acknowledge it.

Why are they all hoarding and buying gold if it has no role in the monetary system?

The answer of course is that it does, but the monetary elites would just as soon not talk about gold.

If you had the power of a central bank, why would you want gold to be part of the equation? It takes away their freedom to print money. Nobody kind of gives up power voluntarily, but they many not have a choice. A monetary system anchored to gold might be required to restore gold in event of another financial collapse.

The next question is, what’s the catalyst that could send gold soaring from today’s levels to $10,000 an ounce?

There are several potential catalysts.

It goes back to the avalanche metaphor I’ve used many times. Once enough snow builds up on the mountainside, it becomes unstable. At some point one snowflake will be the trigger that creates an avalanche.

The current monetary system is unstable, the snow is piling up, and any number of snowflakes could trigger the avalanche. It’s hard to know exactly which one will be responsible, but it could be a geopolitical shock.

Iran recently deployed its navy to conduct exercises in all the important maritime choke points in the Middle East. President Trump has said if those Iranian speed boats get too close to our ships we’re going to blow them out of the water. We haven’t yet, as the navy’s rules of engagement have not permitted them to.

But now President Trump is apparently giving the green light. And the other day an American ship had to adjust course after an Iranian vessel came within 600 yards of it.

So with the Iranians testing us and the navy on full alert, how long will it be before there’s an incident where one of these boats is blown out of the water and maybe trigger something much larger?

That’s one example, but there are many others.

North Korea just conducted four ballistic missile tests that landed in the Sea of Japan. North Korean nuclear weapons will fairly soon be able to target the U.S, west coast. The U.S. is not going to allow that, and the State Department has said the U.S. is prepared “use the full range of capabilities at our disposal against this growing threat.” So we’ll probably have to attack North Korea if we can’t get China to rein them in.

The South China Sea is also another hotspot with rapidly rising tensions. China is flexing its muscles, pitting it against close American allies and American interests. One incident can easily escalate. There are many other geopolitical flashpoints that could trigger a major international crisis.

Another triggering snowflake could be a natural disaster. Or it could be a political earthquake.

The French elections are coming up over the course of two rounds in April and May. What if Marion Le Pen wins the election? I’m not forecasting that she’s going to win right now, but the market is underestimating her probabilities. We also have Netherland elections this month and German elections in October.

The outcome of these elections could potentially bring the future of the European Union into grave doubt.

The bottom line is, there are plenty of potential geopolitical shocks that could threaten the current system, in addition to existing concerns about a stock market collapse or debt crisis.

The time to prepare is now.