– Shrinkflation has hit 2,500 products in five years
– Not just chocolate bars that are shrinking
– Toilet rolls, coffee, fruit juice and many other goods
– Effects of shrinkflation been seen for “good number of years” – Consumer Association of Ireland
– Shrinkflation is stealth inflation, form of financial fraud
– Punishes vulnerable working and middle classes
– Gold is hedge against inflation and shrinkflation …so sing the Oompa Loompas in Roald Dahl’s classic Charlie and the Chocolate Factory. They sing this after each revolting child suffers a mishap during their visit to his glorious production plant. One child’s mishap results in him being shrunk down to a tiny miniature version, in perfect proportion to his full-size self.

This might have given confectioners and manufacturers an idea. Over 2,500 products have fallen victim to shrinkflation. A phenomenon whereby a product’s price either increases or remains the same whilst the size and or quality is reduced.

Currencies have been and are being debased in recent years and now goods and products are being reduced in size and debased. It seems that despite a massive global financial crisis, rising debt levels, increasing inflation, especially in rents and mortgages, and a decline in real household income there is virtually nothing that will make people realise how vulnerable and fraudulent the current financial system is.

But shrinkflation and chocolate bars might be the catalysts required to get people to wake up. Us Irish are a nation of sweet-tooths and chocolate lovers. When they feel short-changed in the confectionary department, hell hath no fury like a sugar-addict scorned.

To make matters worse, the phenomenon has now gone past chocolate bars and includes a whole variety of household items from fruit juice to toilet paper.

As a result, shrinkflation is now official and not just your greedy brain telling you there used to be more chocolate in that Toblerone. Of course, we knew it was a real thing as we’ve been warning about the pernicious effects of shrinkflation. But the UK’s Office of National Statistics (ONS) has declared it’s real so that means it really is and now people are beginning to become concerned and rightly so.

The Consumer Association of Ireland told the Irish Examiner that it has noticed the effects of shrinkflation for “a good number of years”.

“The suggestions that this is done in this way to help the consumer is unacceptable …  That it is solely down to increased costs of ingredients is misleading…The consumer focuses upon price and ingredients — quantity has been well down their list of ‘need to watch’ factors — and manufacturers know and have taken advantage of this.”

Info and data courtesy of BBC

McVitie’s packet of dark chocolate digestive biscuits have shrunk from 332g to 300g, a 10% reduction. According to Which? Tesco sold the biscuits for £1.59 before they shrank and even increased to £1.69 afterwards. Now the 300g packet is currently being sold for £1.50 in Tesco’s website – a 6% reduction in price for a product that is 10% smaller.

Tropicana reduced the size of its carton of Creations Pure Premium Orange & Raspberry juice from one litre to 850ml. It is now available on Asda’s website for a slightly cheaper price of £2.30 – a price reduction of 7%, even as the quantity was reduced by 15%.

A packet of Percol Fairtrade Guatemala Coffee has shrunk in size from 227g to 200g, a reduction of 12%. This coffee was £3.90 in Sainsbury’s and Waitrose before the reduction, and £3.65 and £3.75 respectively after, according to Which?

The tube of Sensodyne Total Care Extra Fresh toothpaste decreased in size from 100ml to 75ml, a 25% reduction, Which? found during its research. Tesco had the product on sale for £2.40, reduced from £3.60, before it shrank to its present size. After the reduction it was priced at £3.49.

Which? found that a standard Andrex four-pack toilet roll had been cut down from 240 to 221 sheets, a reduction of 8%. Yet the retail price had remained around £2.

When questioned about the fact that packets of Maltesers have shrunk from 121g to 103g, a reduction of 15%, Mars explained that it was a way of helping consumers to afford the product.

Surely the first way to help consumers would be to lower prices?

When Toblerone’s manufacturers, Mondelez, were forced to explain the change in the shape of the bars they explained raw materials had increased in price. The size of the bars had decreased by 12%. Neither sugar or cocoa have increased that much in price, with both falling in recent months. Other manufacturers have laid blame at Brexit’s door. Not so fast says the ONS, “Our analysis doesn’t show a noticeable change following the referendum that would point to a Brexit effect.”

So it’s not Brexit and it’s not raw material inputs. So what is it? Profit seeking, in stealth mode.

Shrinkflation is profit seeking in stealth mode. If a manufacturer put up the price of your 100g chocolate bar you would clearly notice, as you look at the price first. But by maintaining the price and decreasing the size you are less likely to notice.

This plays on your trust in manufacturers and is very akin to fraud.

Shrinking the size of goods is just a stealthier way to increase profits than say raise prices.

During recessionary times consumers are far more sensitive to price, they will seek out alternatives to your product. Perhaps they will choose a supermarket’s own-brand toilet role rather than yours.

So brands compete by reducing size and maintaining price, in order to avoid this scenario.

In their book ‘Phishing for Phools: The Economics of Manipulation and Deception’, the Nobel Prize winning economists George Akerlof and Robert Silver argue that companies exploit human weaknesses because the market makes them do it. If they do not exploit consumers then competitors will and they will be at a significant disadvantage.

This is something that is carefully thought about. Advisors and consultants are brought into help manufacturers consider this very thing.

James Brown, a partner at the firm Simon-Kucher, which advises companies on pricing strategies, told the Guardian that the the downsizing made sense.

“You don’t say: ‘I want to consume 120g of chocolate.’ We say: ‘I want a chocolate bar that costs 75p or less’…“Shrinkflation is actually quite a successful tactic because a lot of shoppers are more sensitive to a price change than to a weight change.”

We have been aware about shrinkflation for many years. I first became aware of it when I was a student and used to study price labels a bit obsessively (were they pricing weight, sheets, number of cans? Was the 3 for 2 really that good a deal?).

I remember noticing over a four year period the changing weight of tinned tomatoes. Yet, we were repeatedly told that inflation wasn’t a problem.

This is because shrinkflation isn’t on the radar of inflation calculators. Inflation is still our favoured friend when it comes to assessing the health of the economy. This has many problems in itself but shrinkflation is on a whole other level as it can avoid impacting inflation figures altogether.

The ONS claims that ‘within the “food and non-alcoholic beverages” category, shrinkflation had no noticeable effect. This could be because the number of shrinking pack sizes is relatively small.’

It did have some impact on the price of “sugar, jam, syrups, chocolate and confectionery” which have increased by 1.22%. But they say that in the overall inflation figures, shrinkflation does not really feature as ‘food and drink was a relatively small part of the basket of goods and services that is tracked to gauge overall changes in the cost of living.’

I don’t know about you, but most people I speak to (especially those with families) do not feel that food and drink are a relatively small part of their cost of living.

Add items such as toilet paper (basic essentials) then you basically have a government body that is no longer interested in recording how much damage is being caused by profit-seeking manufacturers.

This does not bode well for households who are suffering from the effects of inflation (whether blatant or stealth). Earlier this week we outlined how over 41% of full-time workers are unable to survive without some form of credit and that average household debt is now at over 135% of household income.

Those families who are expecting the central bank and government to step in and enact measures that will relieve the daily burden of shrinkflation and other side-effects of inflation will be waiting for some time.

Unfortunately, the authorities do not appear to be taking the data seriously, or have the will to take on powerful multinational corporations.

In the meantime, this is another way that working and middle class families get poorer.

It could be the case that the shrinkflation fraud is tolerated because  the UK and the western world does need to stop eating so much sugar and unhealthy processed foods. Childhood obesity has been called a national emergency by the UK government, whilst a 2014 WHO study found that 28.1% of British adults were clinically obese and 62% overweight. We are at the top of the obesity league of Europe (woo, #winning).

The UK cannot afford for its citizens to be so unhealthy. A 2015 report by the Commons Health Select Committee concluded that treating obesity related medical conditions costs the NHS £5 billion a year with a wider cost of £27 billion to the economy.

So, in short, the government is almost incentivised to keep this rouse going. They know that household incomes are not increasing, so people cannot afford to buy much more food in order to compensate for shrinkflation. Perhaps, they see this as the unforeseen solution to a growing crisis?

The food industry has even been congratulated on this blatant fraud.

Dr Alison Tedstone, chief nutritionist at Public Health England, told the Telegraph, “We know obesity is linked to a range of health and social issues, from diabetes to poor self-esteem, that are harming children and families…We welcome actions by the food and drink industry that help them to have a healthier diet.”

Why not reduce the size of the product and the price? What if these actions help make families poorer by basically misleading them?

Shrinkflation is a symptom of an economy in recession and a compliant media and government. It is exacerbated by low growth rates in income, a rising cost of living and falling values in our increasingly devalued currencies. 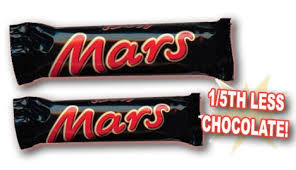 Shrinkflation is ultimately all about manipulation. Manufacturers are manipulating the needs and desires of consumers. Whilst the ONS might declare that the phenomenon of shrinkflation has not had an impact on inflation figures, we believe it is likely having a bigger impact than is admitted.

Shrinflation is a hidden form of inflation and is detrimental to the health of UK households.

We see manipulation in every corner of the economy, whether we are talking about the surge in household and corporate debt, the underhand implementation of negative interest rates, inflationary monetary policy and the devaluation of currencies.

This is about manipulation and ultimately the reduction of our living standards and our wealth.

The fact that prices and money can be so easily and legally manipulated suggests that savers need to not be totally reliant on the government to protect their savings and lifestyle.

There are limited ways to protect yourself from this. One of them is by investing in physical gold and silver which is allocated and segregated in your name. Gold has proven itself to be a hedge against inflation and wealth destruction.

We turn to the wisdom of Willy Wonka for our concluding thoughts.

‘There’s plenty of money out there. They print more every day. But this ticket, there’s only five of them in the whole world, and that’s all there’s ever going to be. Only a dummy would give this up for something as common as money. Are you a dummy?’