There was a huge trend change in U.S. gold investment in May. Something quite extraordinary took place which hasn’t happened for several decades. While Switzerland has been a major source of U.S. gold exports for many years, the tables turned in May as the Swiss exported a record amount of gold to the United States. 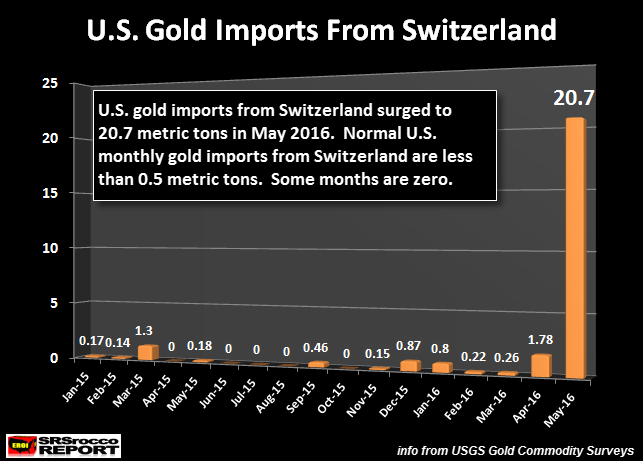 The overwhelming majority of gold flows from the U.S. have been exports to Switzerland and the United Kingdom (U.K.):

Furthermore, as I have mentioned in precious articles, the U.S. has been exporting more gold than it produces and imports. However, this changed in May as the Swiss exported more gold to the U.S. in one month than they have every year going back until 2000: 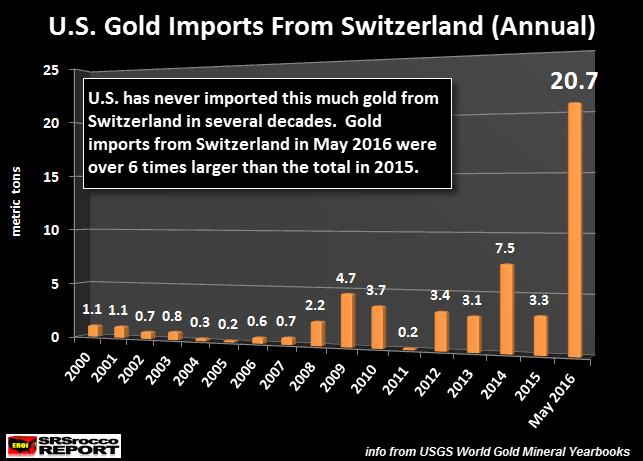 Why the big change? Could this have had something to do with the huge gold price since the beginning of 2016, or maybe was it due to political changes such as the upcoming BREXIT vote in June? Of course the BREXIT vote is now history as the British citizens voted to leave the European Union.

However, something motivated this huge trend change in normal gold movements to Switzerland. Moreover, total U.S. gold imports in may shot up to 50 metric tons, almost double the 26.5 mt figure in April. In addition, total U.S. gold exports hit a low May as only 20.2 mt were shipped to foreign countries. Total U.S. gold exports Jan-May 2016 of 139 mt are down 28% compared to 195 mt exported during the same period in 2015.

So what’s going on here? Why the declining U.S. gold exports or surging gold imports from Switzerland? Are foreign countries demand less gold?? I doubt it. Or how about the massive increase in supposed gold flows into the Global Gold ETFs & Funds?? While there is no way of knowing how much gold these Gold ETFs & Funds hold, something seriously changed in May as the Swiss exported more gold to the U.S. in one month than they have every year for several decades.

It will be interesting to see that data for the next few months when the USGS releases their Gold Mineral Industry Surveys.