by The Phoenix, Gains, Pains & Capital:

The financial system is in trouble.

Indeed, by the look of things, we are about to experience a wave of deflation… in years.

Let’s first talk about the $USD.

The $USD has broken above initial resistance (bottom red line) and currently sits just below 95. This is a MAJOR problem for risk assets. 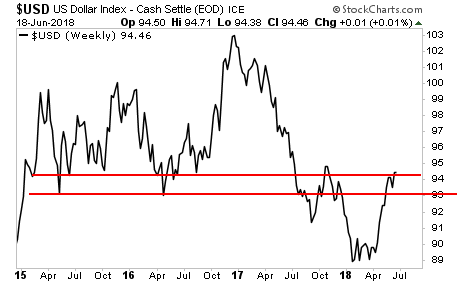 Now, some of you are no doubt asking “the $USD was at this exact same level in late 2017 and it wasn’t a problem… what’s changed?”

Put simply, the Fed is NOW pulling US dollars out of the financial system at a rapid clip. And it is doing this at a time when the ECB is PUMPING €30 billion into the system per month. Between this and the fact the Fed is on track to raise rates SEVEN times within 24 months (2016-2018)… while the ECB is STILL keeping rates in negative rate territory, the $USD being at 94 is a MAJOR problem for the financial system.

Remember, globally the financial system has over $9 TRILLION in $USD denominated debt. Some $6 trillion of this is in the Emerging Market space. So with each tick higher in the $USD… and with each liquidity drain by the Fed, the system is  “drying up” from a $USD perspective.

You can see this in the Emerging Market space where countries like Brazil, Turkey, and South Africa are in literal FREE FALL. 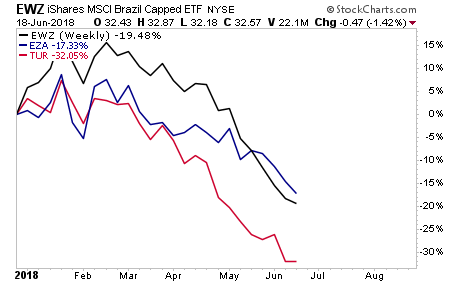 Brazil’s stock market is DOWN 20% YTD. South Africa is down 17% YTD. And Turkey is down 32% YTD. If we were in December (meaning a full 12 months had passed) and the year ended this month, it would be one of the WORST years for Emerging Markets on record. And we’re at those levels only SIX months in.

This issue is now spreading to Asia. China, Singapore, and South Korea’s stock markets have all recently rolled over and are now at their lows for the year. 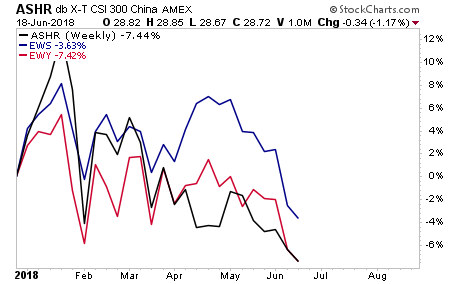 Put simply, DEFLATION is now rising and it is rising fast. And the Fed is 100% to blame for this. And unless the $USD rolls over SOON, this mess is going to spread into the US markets.

The time to prepare for this is NOW before the carnage hits.