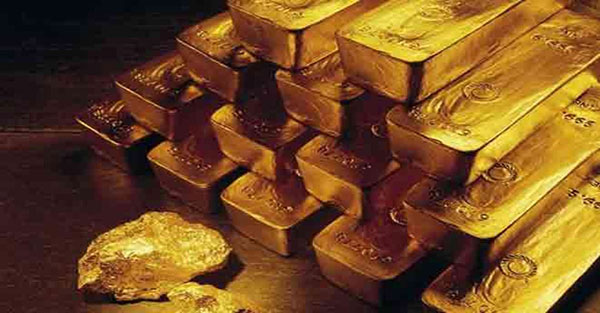 About 20 years ago when I was still a cadet at West Point, my economics professor organized a class trip to the Federal Reserve Bank of New York.

The part of the trip that I remember most was touring the Fed’s high security vault, 80 feet below street level beneath the bank’s main office building downtown.

This vault houses the largest known depository of gold in the world.

None of that gold, of course, belongs to the Fed. The Federal Reserve doesn’t own a single ounce of gold.

Almost all of that gold is owned by foreign governments and central banks.

It’s been that way since the end of World War II—European governments wanted to store their wealth overseas, out of the reach of the Soviet Union.

As a kind of professional courtesy among governments and central banks, their gold has been stored for free by the Fed for the last 70+ years.

Even after the Soviet Union fell, most governments still chose to keep their gold in New York.

It was safe. America was a rich, trusted ally. Why bother moving it?

Fast forward a few decades and the world has clearly changed.

The US government is in debt up to its eyeballs. It has been caught blatantly spying on its own allies. And it’s much less predictable than ever before.

Germany was among the first out the door.

Even as early as 2013, the German government announced that they would bring back at least half of their country’s gold reserves (the second largest in the world) by the end of 2020.

They’re ahead of schedule.

Late last week the German government moved $13 billion worth of gold from New York to Frankfurt.

That shipment puts them nearly at their goal, almost four years earlier than planned.

It’s easy to understand why.

The entire global financial system requires having a great deal of trust.

If you have an online brokerage account, you may be surprised to know that you don’t actually own a single stock in your portfolio.

When you log in to your account and buy, say, Apple shares, the brokerage will typically register those shares in its own name, not your name.

Apple has no idea who you are. The shares are effectively owned by your broker. It’s their asset, not yours.

Now that’s putting a LOT of trust in a complete stranger.

It’s the same when you deposit your money in a bank. It’s no longer your money. It’s the bank’s.

This is how the system works; your money keeps getting passed around, which means there’s an entire daisy chain of other people, or “counterparties”, standing between you and your savings.

“Counterparty risk” is the risk that something goes wrong with one of the many, many counterparties in this daisy chain.

Imagine that you deposit money with X.

If something goes wrong with Z, you’re all screwed.

This is the nature of counterparty risk. Someone far down the chain can cause consequences for everyone else.

Now, ordinarily, this isn’t a problem. When the system is functioning normally, institutional counterparty risk is low.

But counterparty risk becomes a BIG deal, and QUICKLY, when the system stops functioning normally.

We saw the effects of this during the 2008 financial crisis. As one bank went down, it dragged multiple others with it.

No one ever thinks about counterparty risk until it becomes a problem… and by then it’s too late.

Germany used to place a lot of trust in the US government and central bank to store its gold.

But there are obvious signs that Uncle Sam is no longer the reliable, credible, trusted counterparty he once was.

Germany hasn’t quit cold turkey; they’re still going to store a minority portion of their gold in the US.

But they have taken a major step to reduce exposure to a counterparty that’s obviously bankrupt, which hence reduces the risk.

You can do the same thing; it’s why we regularly discuss holding physical cash.

Keeping some physical cash ensures that there’s no more middle men (i.e. counterparties) standing between you, and at least a portion of your savings.

Having some cash means that if some major crisis should ever befall the banking system, then you’ll at least have some emergency savings that’s not at risk.

But even if nothing happens… even if there’s never a single problem ever again in the banking system… you won’t be worse off holding a bit of cash.

Do you have a Plan B?

If you live, work, bank, invest, own a business, and hold your assets all in just one country, you are putting all of your eggs in one basket.

You’re making a high-stakes bet that everything is going to be ok in that one country — forever.

All it would take is for the economy to tank, a natural disaster to hit, or the political system to go into turmoil and you could lose everything—your money, your assets, and possibly even your freedom.