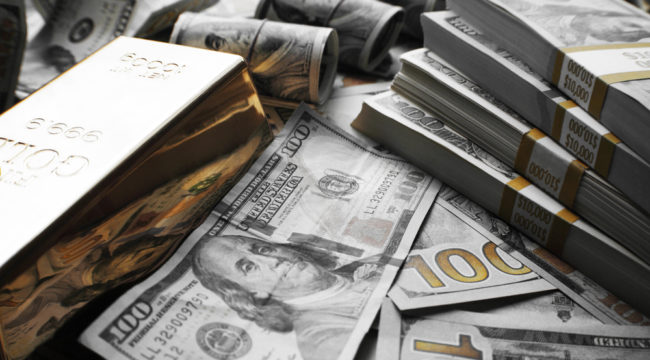 In order to prevent people from using that option, the elites have launched a war on cash, as recent events have borne out. The war on cash is old news, but it is escalating rapidly…

India’s decision to make 1,000- and 500-rupee notes worthless is having devastating ripple effects in the Indian economy and the market for gold.

One immediate consequence of the cash ban was that paper money began trading at a discount to face value. The entire banking system in India has been running out of cash and alternative forms of payment such as gold and barter have been emerging.

In plain English, you might be able to sell your illegal 1,000-rupee note to a middleman for 750 rupees in smaller denominations. You would get legal tender for your worthless 1,000-rupee note. The middleman presumably has some connection with the banks that allows him to deposit the funds without being harassed by the tax authorities.

It’s not unusual for bonds to trade at a discount due to changes in interest rates or credit quality, but this is the first time I’ve ever seen cash trading at a discount (although I did predict this development in Chapter 1 of my new book, The Road to Ruin.)

The second distortion is that gold is selling in India for over $2,000 per ounce at a time when the world market price is under $1,200 per ounce. This is because Indian citizens are rushing to buy gold for cash.

The gold dealers can then deposit the cash for full value. This is just another form of discount on the face value of the cash. It’s not that gold is more valuable; it’s just that your $2,000 is worth less than $1,200 (in rupee equivalents) when it comes time to buy the gold.

I’ve said for a while that the war on cash would be followed quickly by a war on gold. India may prove the point.

Don’t think of this as something that happens only in poor countries. Similar scenes will play out in the U.S. and Europe as elites become more desperate to take your money.

It should be clear that the war on cash has two main thrusts. The first is to make it difficult to obtain cash in the first place. At home, U.S. banks will report anyone taking more than $3,000 in cash as engaging in a “suspicious activity” using Treasury Form SAR (Suspicious Activity Report).

The second thrust is to eliminate large-denomination banknotes. A 1,000-rupee note may sound like a lot, but it’s only equivalent to about $15 U.S. dollars. The U.S. got rid of its $500 note in 1969, and the $100 note has lost 85% of its purchasing power since then. With a little more inflation, the $100 bill will be reduced to chump change.

Of course the European Central Bank announced that they were discontinuing the production of new 500 euro notes (worth about $575 at current exchange rates). Existing 500 euro notes will still be legal tender, but new ones will not be produced.

This means that over time, the notes will be in short supply and individuals in need of large denominations may actually bid up the price above face value paying, say, 502 euros in smaller bills for a 500 euro note. The 2 euro premium in this example is like a negative interest rate on cash.

Ken Rogoff is a leading voice of the elites in the war on cash. He recently wrote an article detailing the ways elites can steal your money. The first is negative interest rates. The second is the elimination of cash (governments can do this by declaring the $100 bill worthless, just as India did with the 500- and 1,000-rupee notes).

The third way is to set higher inflation targets. Rogoff wants to raise the Fed’s inflation target from 2% to 4% per year. At a 4% rate, the value of a dollar is cut 75% between the time you’re 30 years old until a normal retirement age of 65. The money you save in your younger years is nearly worthless by the time you need it.

Why should you care what Ken Rogoff thinks? Because Rogoff is not just another big brain. He’s a professor of economics at Harvard University and the former chief economist of the International Monetary Fund. More importantly, his name is frequently mentioned as a possible nominee for a seat on the Board of Governors of the Federal Reserve. If Rogoff were on the Fed board, he’d be in a position to turn his confiscatory ideas into policy.

But even if Rogoff remains at Harvard, his views are highly influential on economic policy in general. Rogoff is not alone in his views.

One solution to negative interest rates is to buy physical gold. But if the government has a war on cash, can the war on gold be far behind? Probably not.

Governments always use money laundering, drug dealing and terrorism as an excuse to keep tabs on honest citizens and deprive them of the ability to use money alternatives such as physical cash and gold. When you start to see news articles about criminals using gold instead of cash, that’s a stalking horse for government regulation of gold.

Guess what? An article on the topic of criminals using gold just appeared this spring, in Bloomberg. This is one more reason to get your physical gold now, while you still can.

If you do not already have a 10% allocation of investible assets to gold, it’s time to make that allocation. Gold is almost the only way to avoid the plans for confiscation that Rogoff and the other elites have in mind.