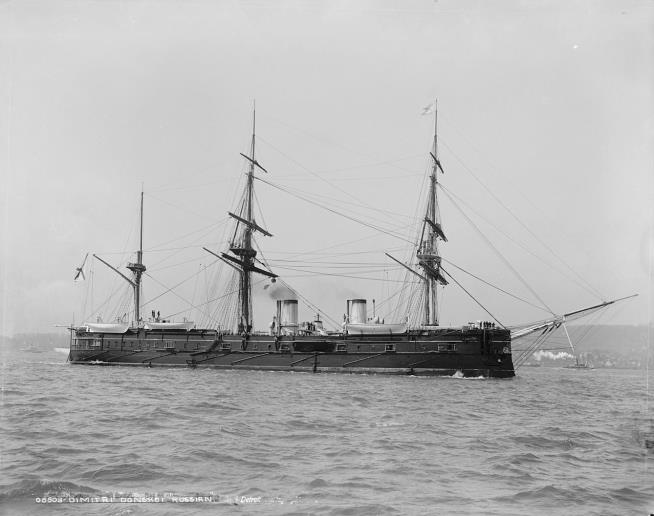 (NEWSER) – Days after finding a sunken Russian battleship rumored to have gone down with what would now be $132 billion in gold, a South Korean treasure-hunting team is teasing a big reveal. Shinil Group on Tuesday announced the discovery of the Russian Imperial Navy cruiser Dmitrii Donskoi, which is believed to have been carrying 200 tons of gold when it sank in 1905 during the Russo-Japanese War, reports the Telegraph. Found Sunday a mile off the South Korean island of Ulleungdo at a depth of more than 1,400 feet, the ship was easily identified by the Cyrillic name on its stern. “We spotted things that look like treasure boxes, but we have not opened them yet. We will open them up according to due process,” an official tells the Korea Times, adding “part of things that will surprise the world” could be unveiled at a press conference in as little as a week.

According to reports, the Dmitrii Donskoi was carrying gold coins and 5,500 boxes of gold bars—used to cover wages, port fees, and fuel costs for an entire fleet—when it was scuttled and the majority of crew members taken prisoner by the Japanese during the Battle of Tsushima in May 1905, per the South China Morning Post. “The body of the ship was severely damaged by shelling, with its stern almost broken, and yet the ship’s deck and sides are well preserved,” says Shinil Group, which plans to raise the ship this fall. The company—including experts from South Korea, China, the UK, and Canada—adds that half of any treasure will go to the Russian government, 10% will be used to fund a museum and other tourism projects on Ulleungdo Island, and a portion will go toward building a railway line linking Russia and South Korea through North Korea.