Is silver a good investment? Why should someone buy it?

It’s natural and even prudent for an investor to wonder if a particular asset is a good investment or not. That’s especially true for silver, since it’s such a small market and doesn’t carry the same gravitas as gold.

But at this point in history, there are compelling reasons to add physical silver to your investment portfolio (and only one is because the price will rise). Here the top 10 reasons why every investor should buy some silver bullion…

Silver may not be part of our currency, but it is still money. In fact, silver, along with gold, is the ultimate form of money, because it can’t be created out of thin air (and thus depreciated) like paper or digital forms. And by real money, we do mean physical silver—not ETFs or certificates or futures contracts. Those are paper investments, which don’t carry the same benefits you’ll find in this report.

Physical silver is a store of value, just like gold. Here’s why.

• No counterparty risk. If you hold physical silver, you don’t need another party to make good on a contract or promise. This is not the case with stocks or bonds or virtually any other investment.

• Never been defaulted on. If you own physical silver, you have no default risk. Not so for almost any other investment you make.

• Long-term use as money. A scan of monetary history shows that silver has been used in coinage more often than gold!

As Mike Maloney says in his best-seller, Guide to Investing in Gold and Silver, “Gold and silver have revalued themselves throughout the centuries and called on fiat paper to account for itself.”

Owning some physical silver provides you with a real asset that has served as money for literally thousands of years.

#2 Physical Silver is a Hard Asset

Of all the investments you own, how many can you hold in your hand?

In a world of paper profits, digital trading, and currency creation, physical silver stands in contrast as one of few assets that you can carry in your pocket anywhere you go, even another country. And it can be as private and confidential as you want. Physical silver is also a tangible hedge against all forms of hacking and cybercrime. There’s no “erasing” a silver Eagle coin, for example, but that can certainly happen to a digital asset: 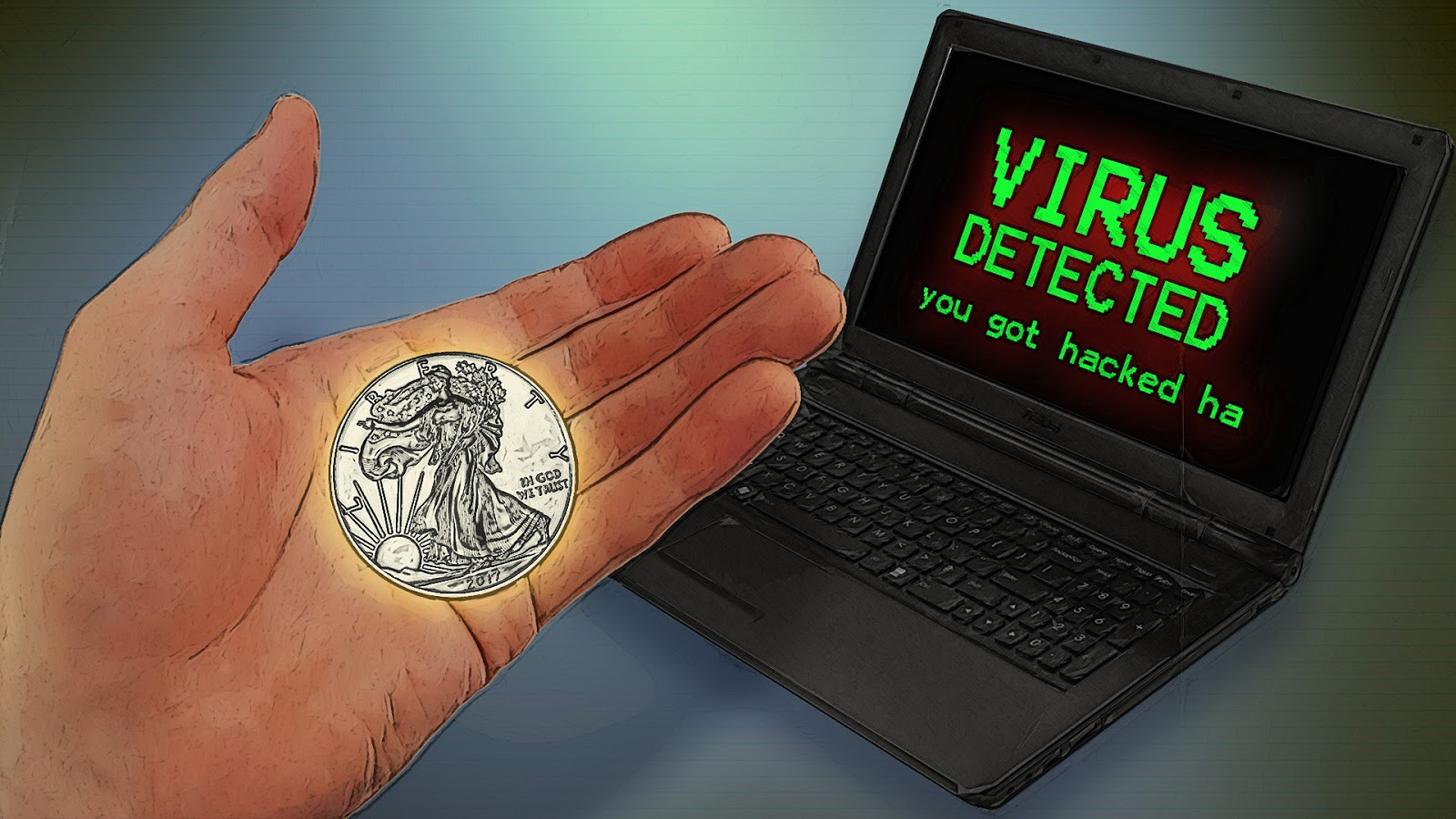 What if I said you could buy a hard asset at 1/70th the price of gold—and it would protect you just as well against crisis?

That’s what you get with silver! It is much more affordable for the average investor, and yet as a precious metal will help maintain your standard of living as good as gold. If you can’t afford to buy a full ounce of gold, silver can be your ticket to holding some precious metals. This is also true for gift-giving. Don’t want to spend over a $1,000 on a present but would like to give a hard asset? Silver just made it more affordable.

Silver isn’t just cheaper to buy, but can be more practical when you need to sell. Maybe someday you don’t want to sell a full ounce of gold to meet a small financial need. Enter silver. Since it frequently comes in smaller denominations than gold, you can sell only what you want or need at the time. 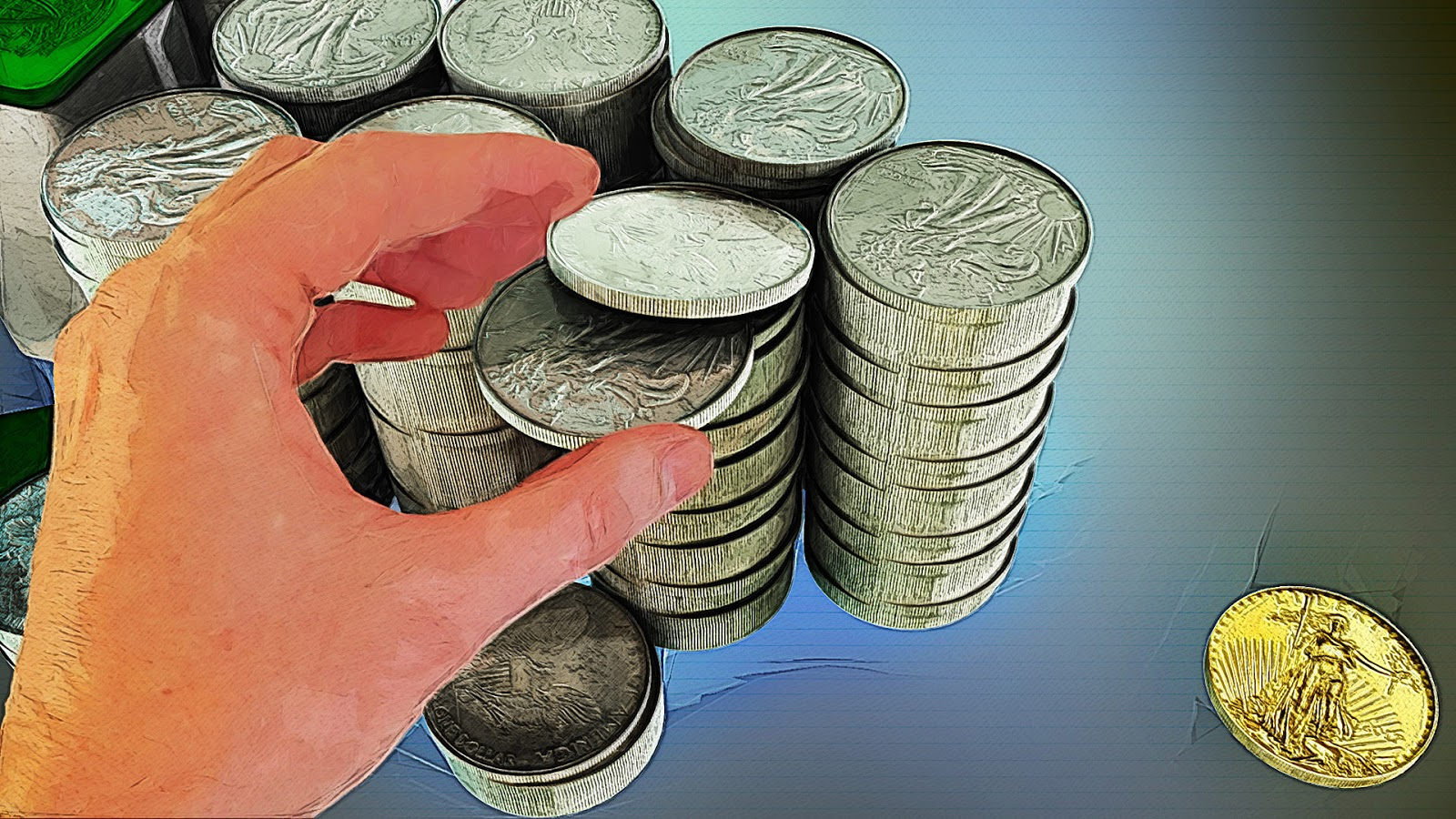 Every investor should have some silver around for this very reason.

Keep in mind that silver coins and bars bullion can be sold virtually anywhere in the world.

Silver is a very small market—so small, in fact, that a little money moving into or out of the industry can impact the price to a much greater degree than other assets (including gold). This greater volatility means that in bear markets, silver falls more than gold. But in bull markets, silver will soar much further and faster than gold.

Here are couple good examples… check out how much more silver gained than gold in the two biggest precious metals bull markets in the modern era:

We can expect this outperformance to repeat in the next bull market, too, because the silver industry remains tiny.

Governments and other institutions have traditionally held inventories of silver. But today, most governments no longer hold stockpiles of the metal. In fact, the only countries that warehouse silver are the US, India, and Mexico.

Look what’s happened to those inventories since 1996. 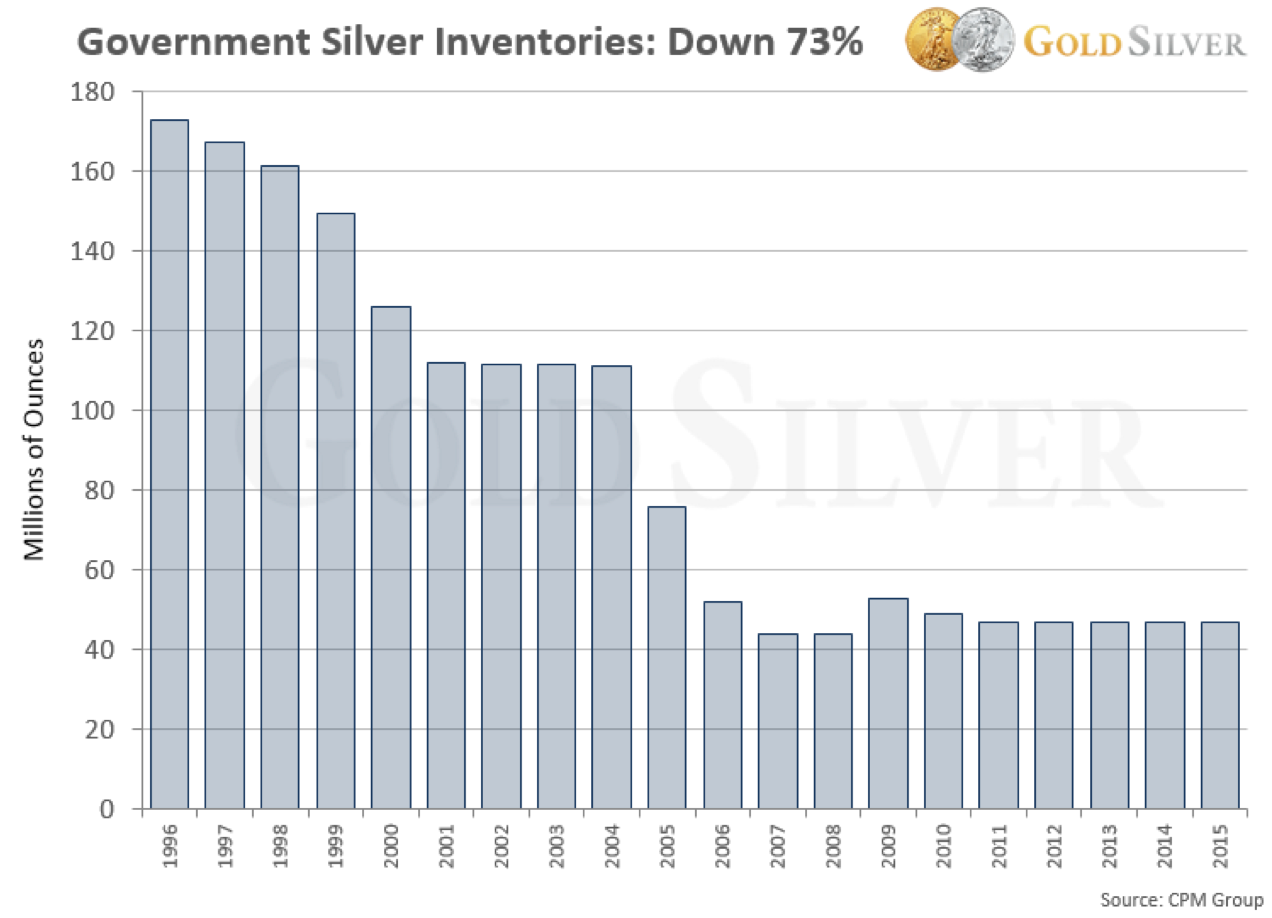 A big reason governments don’t hold a lot of silver is because coinage is no longer made from the precious metal. But as you’ll see, silver is used in industry to a much greater degree now… so if future industrial needs are difficult to meet, governments will be ill-equipped to support those needs.

#7 Industrial Use is Growing

Believe it or not, you don’t go one day without using a product that contains silver.

It’s used in nearly every major industry, from electronics and medical applications to batteries and solar panels. Silver is everywhere, whether you see it or not. As Mike says in his book, “Of all the elements, silver is the indispensable metal. It is the most electrically conductive, thermally conductive, and reflective. Modern life, as we know it, would not exist without silver.” Due to these rare characteristics, the number of industrial applications for silver has skyrocketed. In fact, industry now gobbles up more than half of all silver demand. 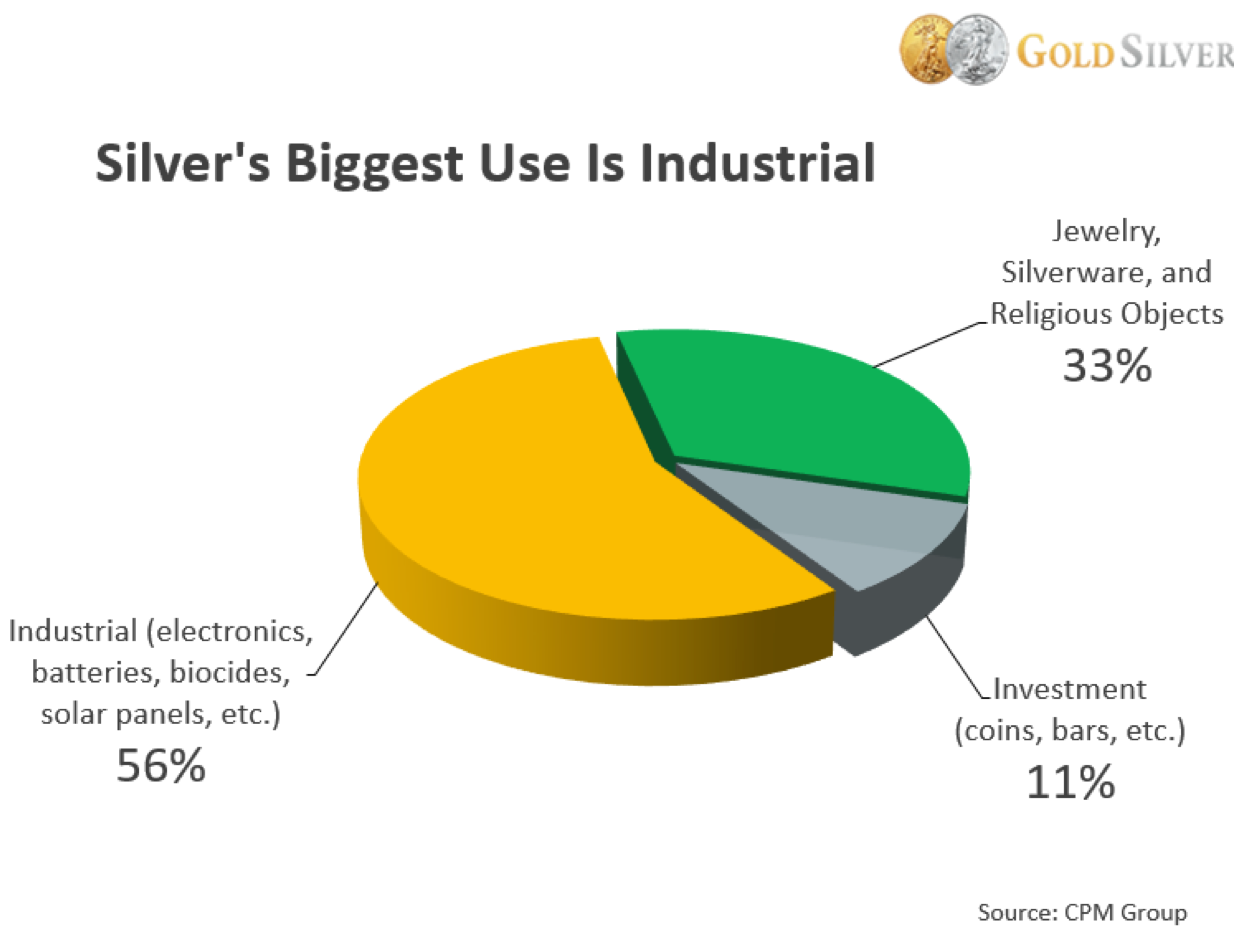 Silver is used in a wide number of industries and products, and many of those uses are growing. Here’s a few examples…

• A cell phone contains about one-third of a gram of silver, and cell phone use continues to climb relentlessly worldwide. Gartner, a leading information technology research and advisory company, estimates a total of 5.75 billion cell phones will be purchased between 2017 and 2019. That means 1.916 billion grams of silver, or 57.49 million ounces, will be needed for this use alone!

• The self-heating windshield in your new Volkswagen will have an ultra-thin invisible layer of silver instead of those tiny wires. They’ll even have filaments at the bottom of the windshield to heat the wipers so they don’t freeze to the glass.

• The Silver Institute estimates that silver use in photovoltaic cells (the main constituents of solar panels) will be a whopping 75% greater in 2018 than it was just 3 years earlier.

• Another common industrial use for silver is as a catalyst for the production of ethylene oxide (an important precursor in the production of plastics and chemicals). The Silver Institute projects that due to growth in this industry, 32% more silver will be needed by 2018 than what was used in 2015.

There are a lot more examples like this, but the bottom line is that due to its unique characteristics, industrial uses for silver continue to expand, which means we can reasonably expect this source of demand to remain robust. But that’s not the whole story… unlike gold, most industrial silver is consumed or destroyed during the fabrication process. It’s just not economic to recover every tiny flake of silver from millions of discarded products. As a result, that silver is gone for good, and limits the amount of supply that can return to the market through recycling.

So not only will the ongoing growth in industrial uses keep silver demand strong, millions of ounces cannot be reused. That might be a problem, because…

#8 Supply is About to Fall

As you might be aware, the silver price crashed after peaking in 2011. Over the next five years it fell a whopping 72.1%. As a result, miners had to scramble to cut costs to turn a profit. One of the areas cut dramatically was exploration and development of new silver mines.

It doesn’t take a rocket scientist to understand that if you spend less time and money looking for silver that you will find less silver. That drought in exploration and development is starting to take effect. 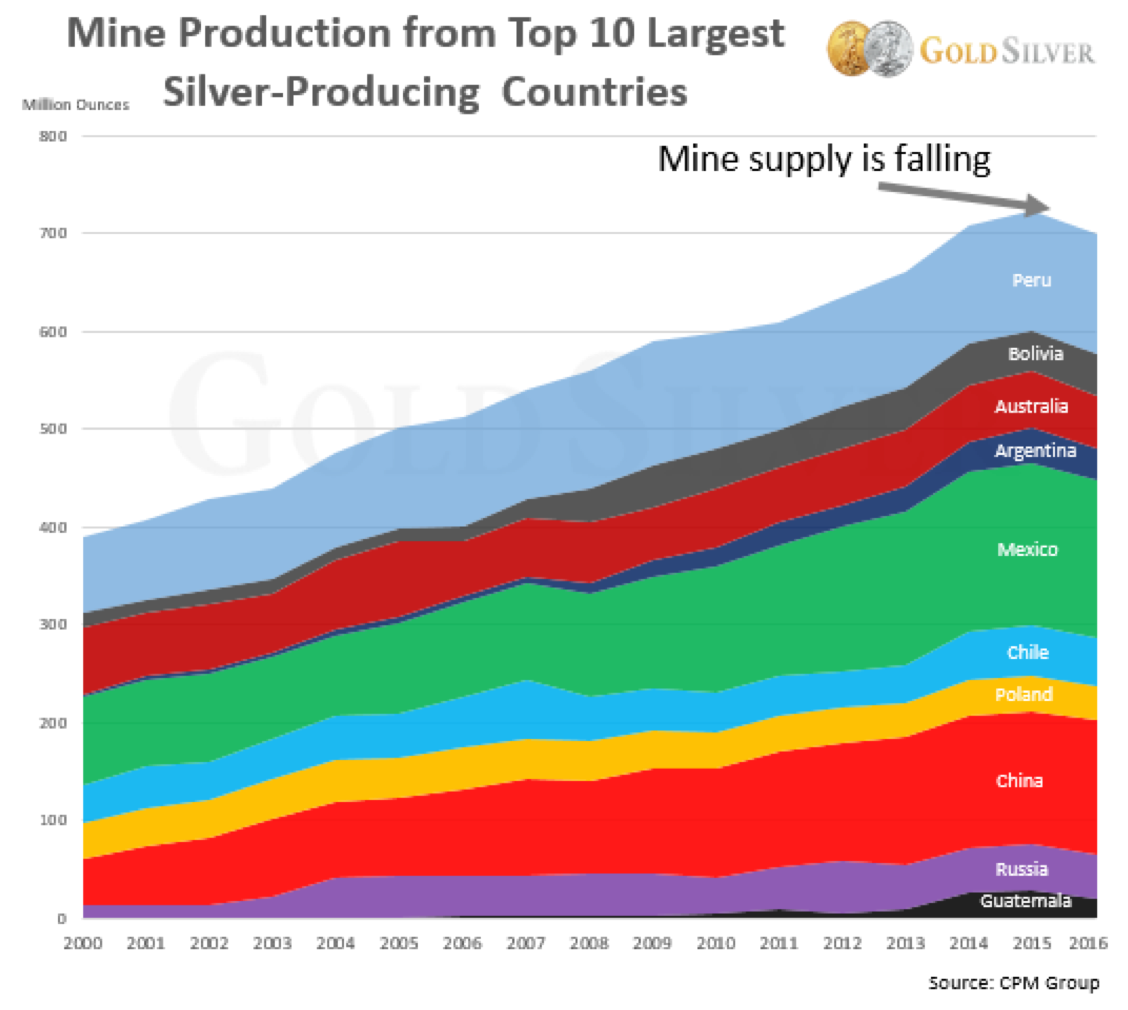 Low prices have affected how much scrap metal is available, too. 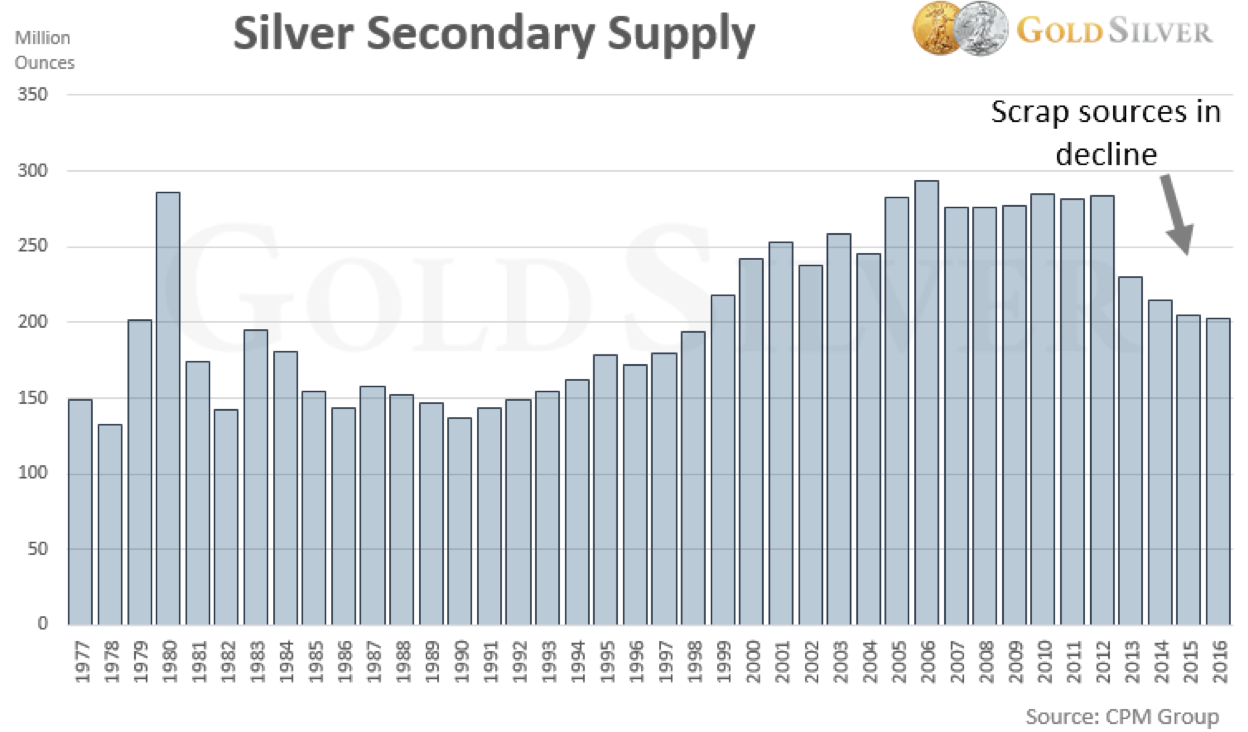 All of this is starting to have an impact on total supply. 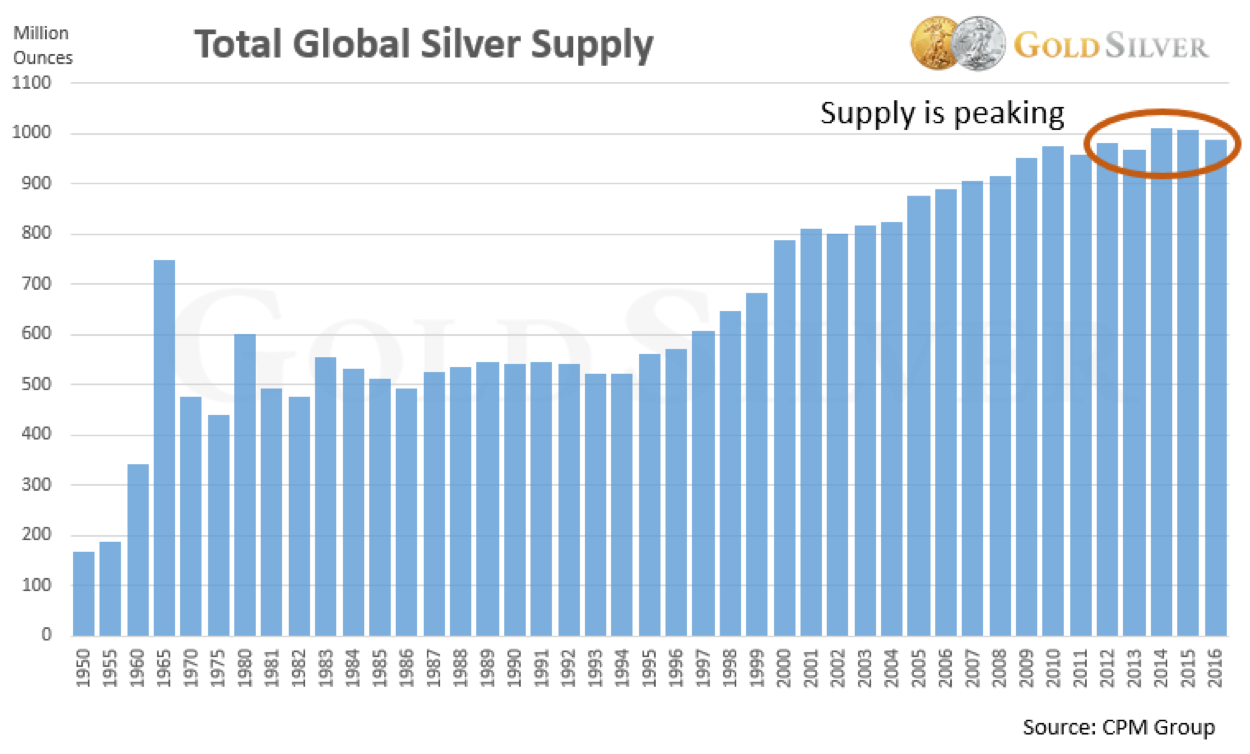 As much as two-thirds of silver mine supply comes as a byproduct from base metal operations (copper and zinc, for example). But these other sources of supply will clearly have an impact on the availability of new metal coming to the marketplace. These realities have set the stage for a peak in silver supply. If demand stays at current levels, it will be difficult for everyone who wants silver to get as much as they need. And don’t look now, but…

Global demand for silver is growing. Virtually all major government mints have seen record levels of sales, with most already operating at peak production. Surging demand is nowhere more evident than China and India. These two behemoth markets have long histories of cultural affinity toward precious metals. And with their populations growing (the opposite of what is happening in the West), their tremendous appetite will continue.

Here’s a couple good examples… check out the growth in silver demand in China (for all uses): 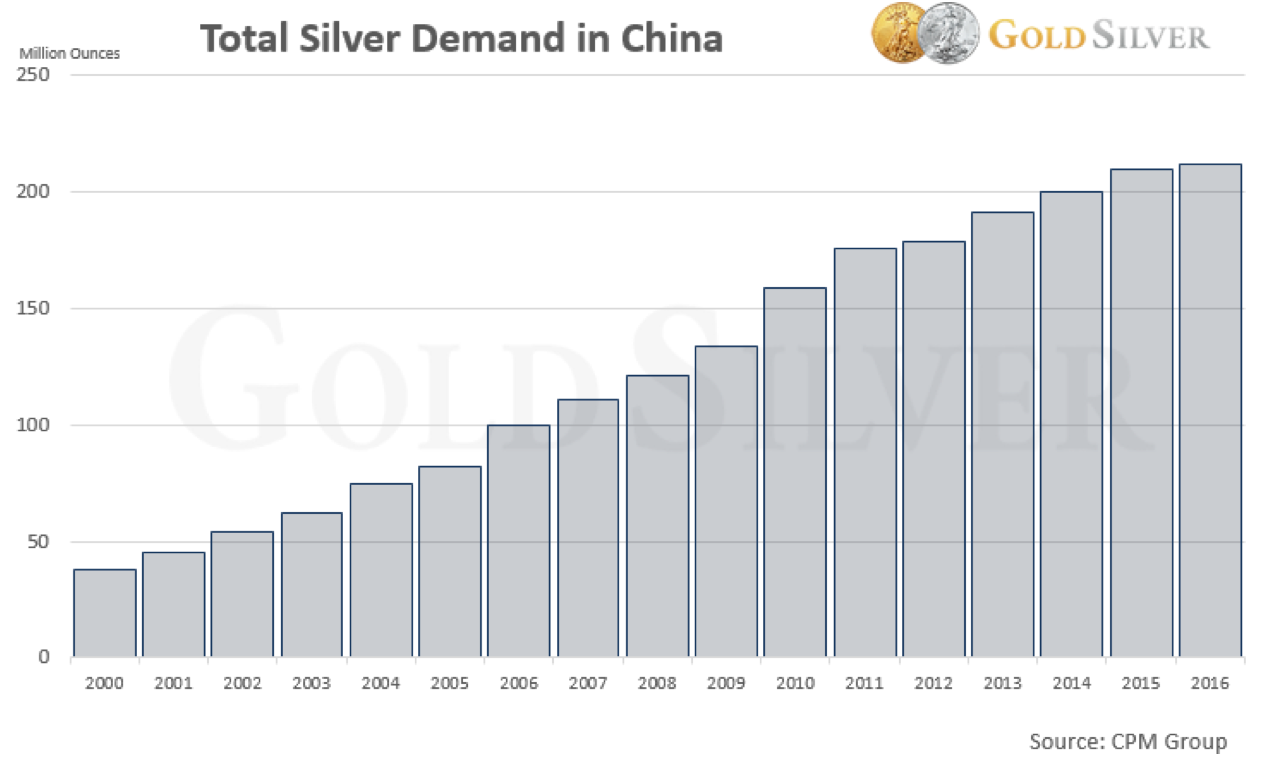 And look at the growth of silver jewelry in India: 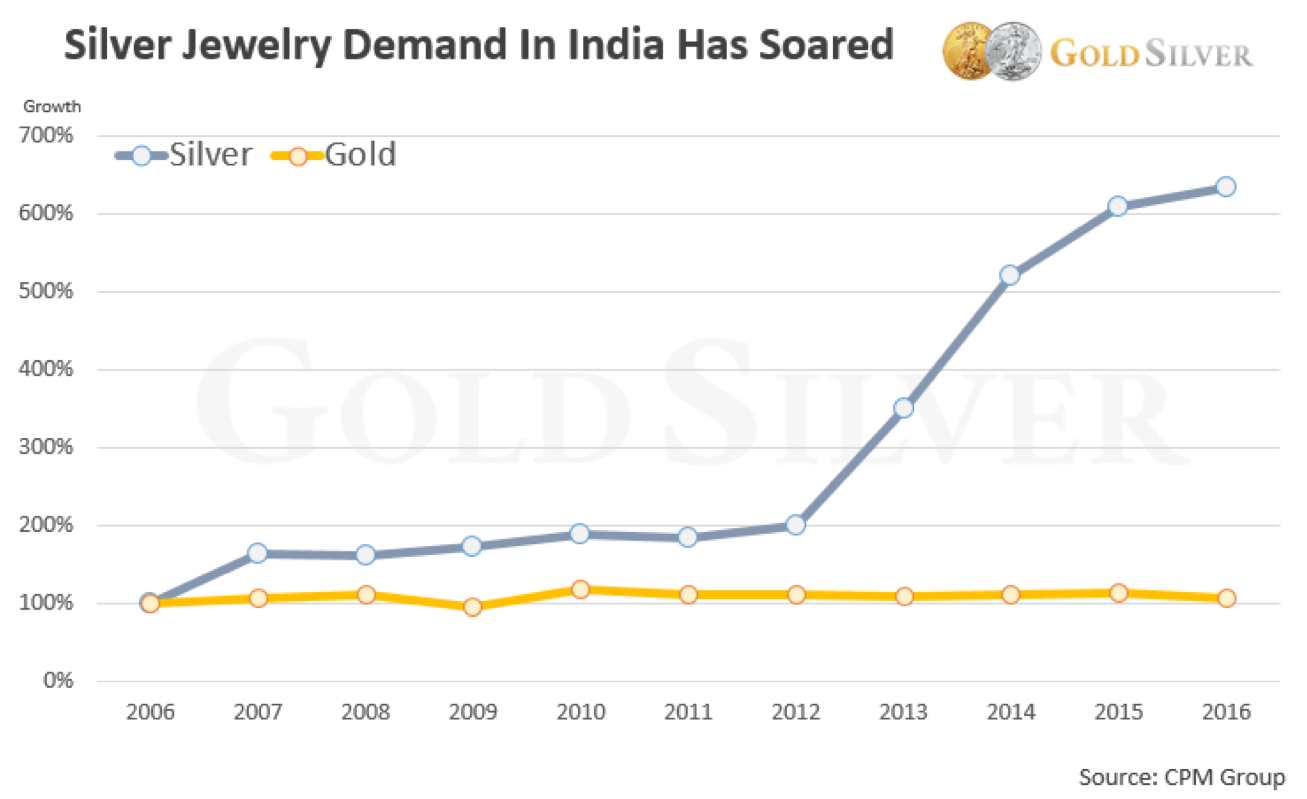 This kind of demand doesn’t happen in a vacuum. Sooner or later there will be consequences when surging demand meets crimped supply—and those consequences are all positive if you own the metal.

Last, the gold/silver ratio (the price of gold divided by the price of silver) can give clues about which metal might be the better buy at any given time. Especially when the ratio reaches an extreme… 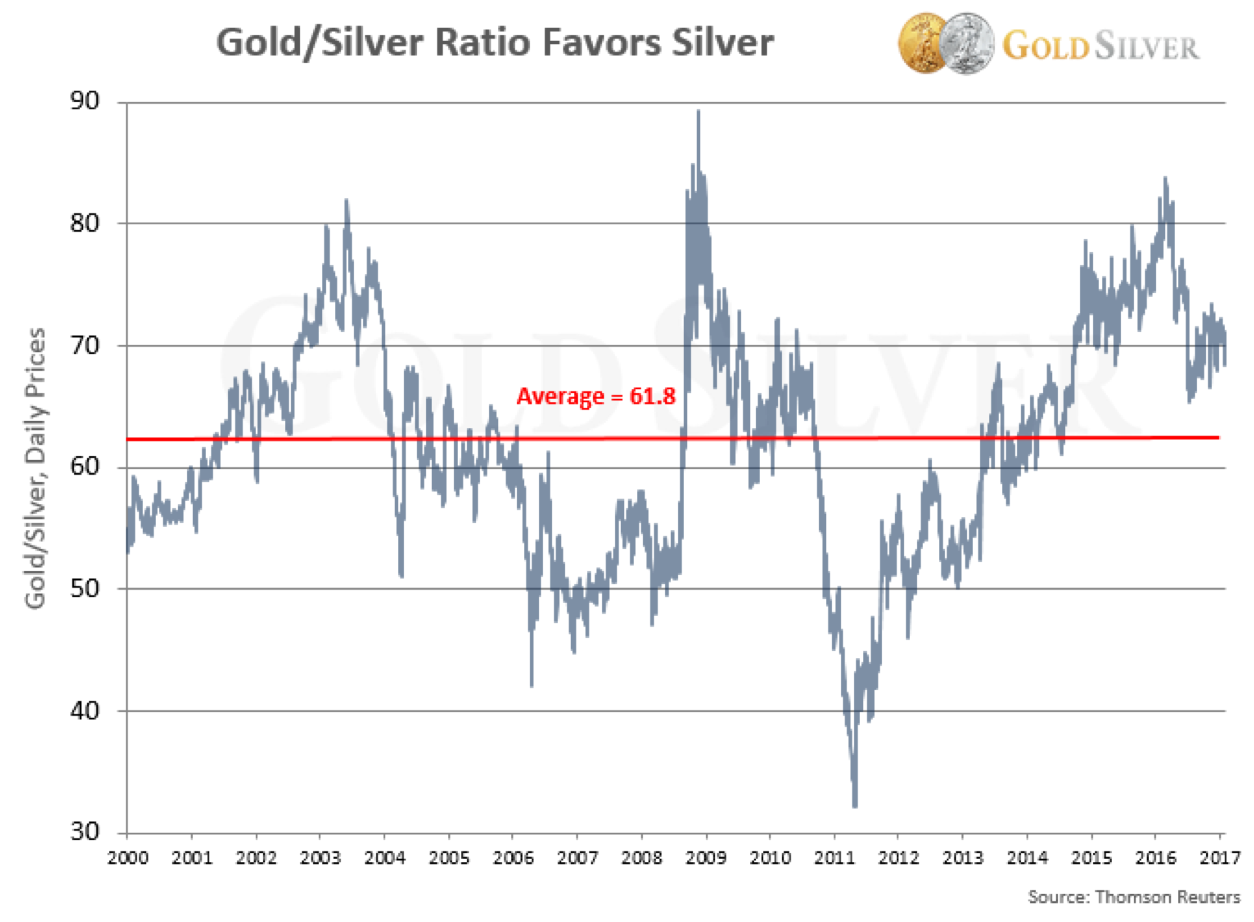 The gold-to-silver ratio averaged 47:1 during the 20th century. It’s averaged about 61:1 in the 21st century. So a ratio at or above 70 is in outlier territory and thus makes silver a good buy relative to the price of gold. You can see that the ratio sank to almost 30 at the peak of the bull market in 2011. It reached as low as 17 in early 1980. This compression in the ratio shows just how much silver can outperform its cousin gold. It also confirms it is undervalued compared to gold.

• Add all up the reasons and silver just might be the buying opportunity of the decade.

It’s hard to find an asset with a greater distortion between price and fundamentals. Not only is it a good hedge against crisis, the price will be forced up by a perfect storm of fundamental factors.