There are clear supply pressures coming to the gold market, so the last thing it needed was a new source of demand. But that’s exactly what it’s about to get, and as you’ll see, it could potentially push supply into a strained predicament. If this new development catches on it could lead to some fireworks in the gold market.

This source of demand comes from China’s announcement that oil exporters to China will accept yuan as payment. This is normally done in dollars (hence known as the petrodollar system). The yuan is not well established internationally yet, so as an incentive, China will offer its exporters the option to convert their yuan into gold. This will essentially result in a new source of gold demand, one not currently present in the market.

So how much gold are we talking about? Let’s run the numbers…

China’s imports in 2017 have averaged 8.55 million barrels of oil per day. This is already 14% more than last year, and has made them the world’s largest crude oil importer. Every report I’ve read says imports will continue to grow by double digits. A launch date for the program hasn’t been finalized, but let’s assume 9 million barrels per day starting next year.

Not all of that would be converted, of course. But consider that many of the countries that export oil to China aren’t exactly friends of the US, and some are outright enemies, so the conversion rate would probably be greater than if it were all coming from Canada or Norway, or countries that already have a lot of gold. Further, conversions would almost certainly rise in a crisis, especially if Mike is right about the coming monetary shift.

Here’s what various amounts of gold conversions would look like, compared to total annual gold supply. 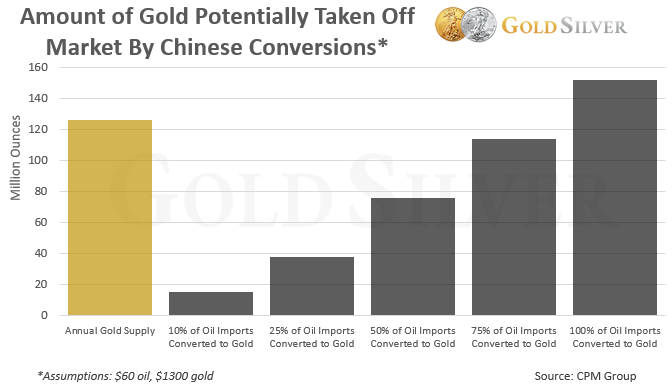 The amount of gold demand from yuan conversions could stun the gold market.

When you consider that most new gold supply is already gobbled up each year, and that global supply is virtually guaranteed to fall, it’s easy to see that even a minor amount of conversions, like 10%, would be problematic. And anything above that just isn’t feasible, and would, by itself, cause a spike in the gold price.

Where’s this gold going to come from? Some would presumably come from China itself, but they already consume all their own domestic production. Reportedly the bulk of it will be sourced from the bullion banks in London. If that’s how it plays out, we’d essentially watch gold be shipped from London to countries like Russia, Iran, and Saudi Arabia. In other words, more West to East gold transfers.

The net effect of all this will be greater pressure on gold supply, and greater pressure on the gold price. It could also have knock-on effects with the US dollar and even the yuan. If the yuan falls in value, for example, gold conversions would likely increase.

The net effect on existing gold owners, though, will be positive and exciting. As conversions begin and supply is taken off market, the price will respond and push higher. And if the amount of conversions makes front-page headlines, look out above. Keep in mind that this catalyst is on top of all the other catalysts poised to explode.

You may be frustrated by the lack of movement in the gold price, and angry at the manipulators that control it, but all that goes out the window when there’s not enough metal to go around. A burst in demand that can’t be met is all it will take to change the dynamic of this market and catapult prices higher, and we’re getting closer and closer to that very set-up.

If these events play out as expected, you’ll want to already be positioned. Are you satisfied with the amount of bullion you own?