The super powers in the West are doing what they can to provoke Russia and indirectly China and Iran into a world war. Most people alive today were not adults when WWII started and therefore did not follow the lead up to the war. But today the whole world can watch how the West has chosen to attack a country which has no major significance geopolitically and does not threaten any other country. Still the West clearly knows that bombing of Syria can start a global conflict with potentially horrendous consequences.

There is no intelligent reporting of these events in the Western media. Whatever propaganda the media is fed, they just publish it without any analysis or investigation. And the US with its allies do not wait for any independent verification of alleged use of chemical weapons. That a world war could start on such fickle reasoning is absolutely frightening.

UK & US STARTS A WAR TO DIVERT ATTENTION FROM DOMESTIC WOES

Syria is of course only an excuse. As a country it would be of no consequence for the safety of the rest of the world if it was left alone. Most wars are started by nations which are under economic pressure domestically. The US and UK fit that picture perfectly.

With debts growing exponentially and massive budget and trade deficits, both these countries are on the way to bankruptcy. Added to that, their leaders are under major pressure at home. Trump has “Deep State” and impeachment pressures and Theresa May suffers from weak leadership in a minority government with an unresolved Brexit. This is the perfect background for pretending that there is a major global conflict and diverting the attention to the international scene.

It is only Russia’s restraint which has so far stopped this conflict from turning into something very serious for the world. We must remember that Russia only has two military bases outside of their country whilst the US has around 1,000. Also, according to independent experts, Russia’s military might is far superior to that of the US. But in the case of a nuclear war, both countries have more than enough power to destroy the world. So we must hope and pray that it won’t come to that.

The best time to make a strategic and long-term investment decision is when the asset you intend to buy is unloved and undervalued. That was certainly the case with gold at the time. Gold had been going down for 19 years from $850 in 1980 to a low of $250 in 1999. Central banks around the world had been selling a major part of their gold. The UK and Switzerland comes to mind as two countries selling the majority of their gold around the lows – a very good buying signal.

As we were forecasting a potential financial crisis at some point in the future, we recommended, in early 2002 to our investors to buy gold for up to 50% of their financial assets. Gold was then $300. At the time this was quite a radical proposition, especially since gold was then a barbarous relic that was totally out of fashion. The advantage with buying an undervalued asset that is not on the front pages, is that the risk is so much smaller than when the trade becomes crowded.

GOLD READY FOR THE NEXT STRONG MOVE UP

In my opinion, gold is now in the process of breaking out from the 5 year consolidation. We need to get proper confirmation with a move to $1,400 but the position of the quarterly chart confirmed by the rising MACD indicator is a strong sign that the next move in gold to new highs is imminent.

The chart below also shows that gold is in a strong uptrend and that the correction in the last 5 years is minor and finishing. 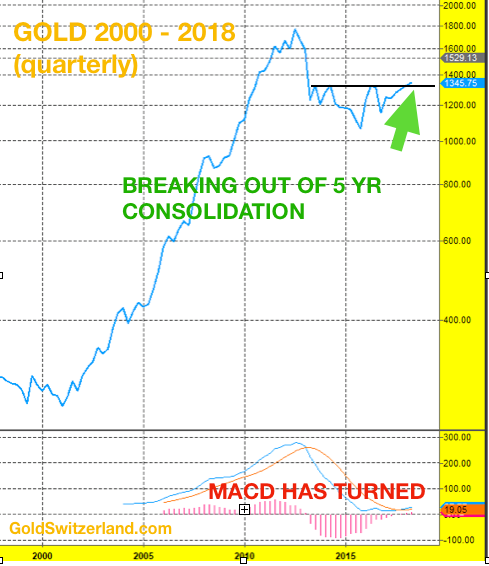 PHYSICAL GOLD IS HELD FOR WEALTH PRESERVATION NOT FOR SPECULATION

We must remember that gold is not bought or held as a conventional investment for capital appreciation purposes. No, gold has a much more important function than that. Our company invested in gold in 2002 because we identified the risks in the financial system as very high. But today the risks are substantially higher and the reason for buying physical gold even more compelling.

WE BUY PHYSICAL GOLD BECAUSE:

It might appear that I am a gold bug but that is far from the case. We bought gold in 2002 to protect against the colossal risks we saw in the world economy and financial system. We are not in love with gold but believe that it is the best protection you can buy and own today. At some point gold will be overloved and overvalued. Then we will recommend to our investors to sell some of their gold or swap it against other assets which are unloved and undervalued. But I expect that time to be quite a few years away. 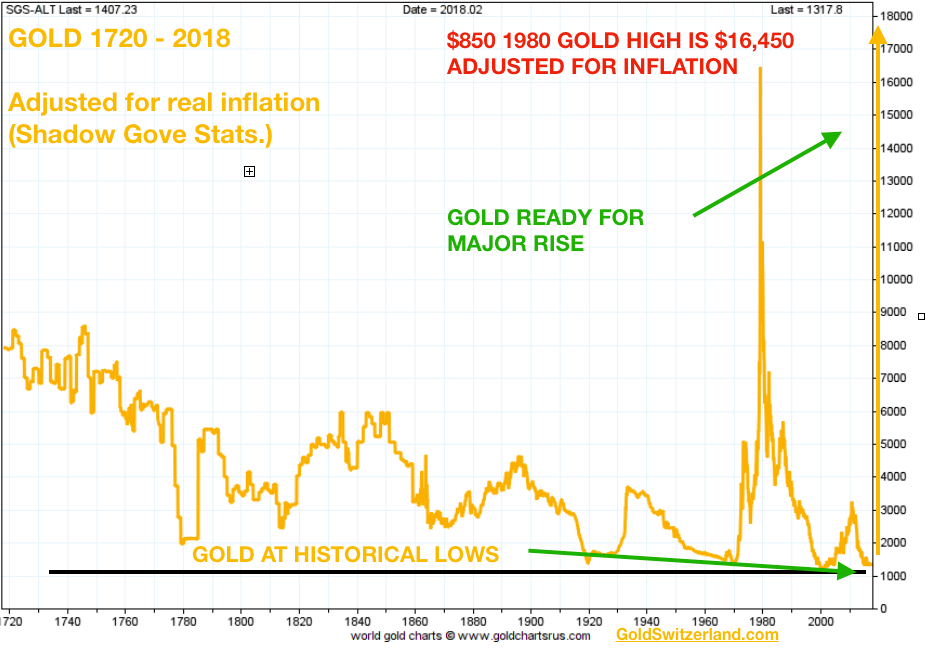 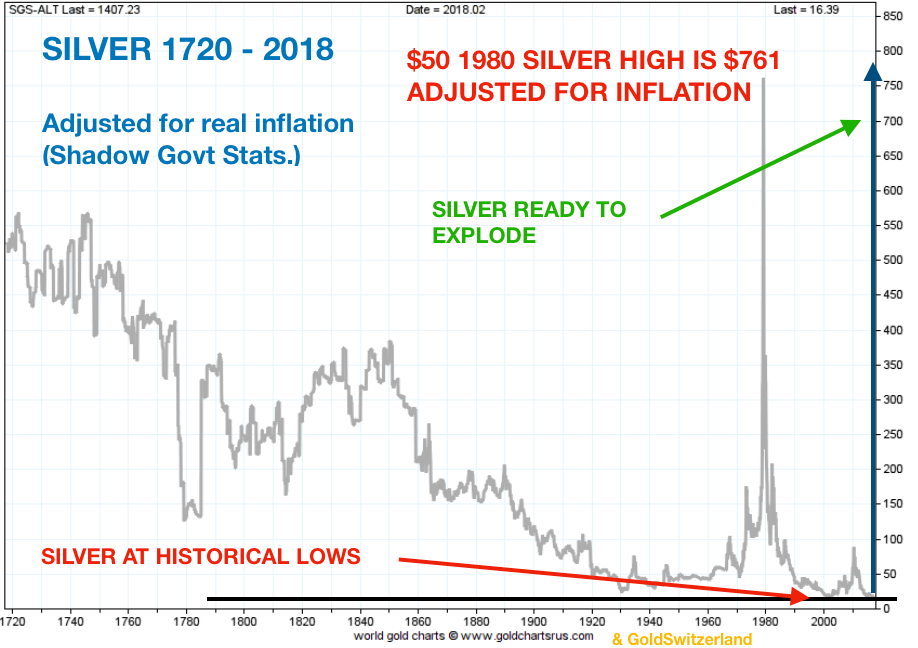 Gold at $16,450 and silver at $761, makes the gold-silver ratio 22, which is in line with historical levels. But since the ratio is just below 79 today, it means that silver will move almost 4x as fast as gold.

GOLD AND SILVER ARE AT HISTORICAL LOWS – INFLATION ADJUSTED

Bearing in mind that credit creation has been exponential in this century with global debt having doubled to $250 trillion since 2006, gold has in no way reflected this money printing and total destruction of paper money. So this is still to come. Once the intervention in the paper market fails, which could happen at any time, the moves in gold and silver will be explosive.

The time to own physical gold and silver is today and not when they move to new highs. Both metals are at inflation adjusted historical lows and the downside risk is minimal. Also, they probably are the most undervalued of all assets currently.

With geopolitical, economic and financial risks at an extreme high, please don’t ignore these risks and don’t ignore history. And with the precious metals at extreme lows, it would be very unwise not to own substantial protection in the form of physical gold and silver.