This is the heart and soul of usury; the reason why banks are so powerful, and the reason why usurers have been hated with visceral hatred throughout history. The usury sector uses the law to enforce an alternate reality where their profits grow faster than the real economy. If they were honest investors, their money would be directly invested into the economy, so that their wealth would grow (and shrink) with the real economy. But through the hateful invention of usury, they create an alternate reality where their wealth always grows faster than the real economy. 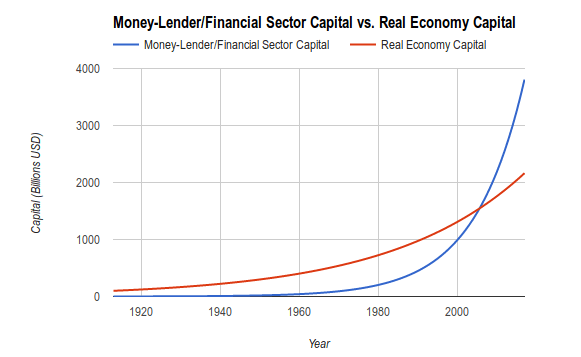 The chart assumes a relatively low business loan interest rate of 5%, and a high delinquency rate of 6.75% (the highest recorded by the St. Louis Fed between 1987 and 2016).

Wherever the usurers take control of an economic system, within a short span of time their wealth grows so that they own most of the economy; its largest companies, its real estate market, its mainstream media, its academia. In the United States, through neo-liberal usurer economics, they have entirely shut down any honest examination of the evils of usury. Through their control of the media, interest and usury are taken for granted, and the mostly-Christian peasant class of the West is made to think of mortgages as an “investment”, rather than a tremendous risk that enslaves them to debt.

Usury is evil because, on a macro scale, it passes off most risks to the borrower, and most profits to the lender. When a usurer lends money at 5% interest to a town’s businesses, some of these businesses will make a profit, and some will make a loss. If the town’s economy grows at 3% during the year, it means some businesses made a profit on the money they borrowed, and some made a loss, so that on average there was a profit of 3% and a loss of 2%. To the usurer, none of this matters. He gets to charge 5%, pretending that the economy grew at 5%, so that after the year passes, he ends up with close to a 5% profit, while the town ends up with a profit of 3%. This gives him an annual profit advantage of 2%. Within just a few years his profits grow so fast that he will afford to buy up more and more of the town’s land, housing and businesses, until he gains near-total control of the town’s economy, and manages to extract rent and profit from every nook and cranny of it. Below is a chart of this process over 20 years, assuming both the money-lender and the townsfolk have $10 million at the beginning. 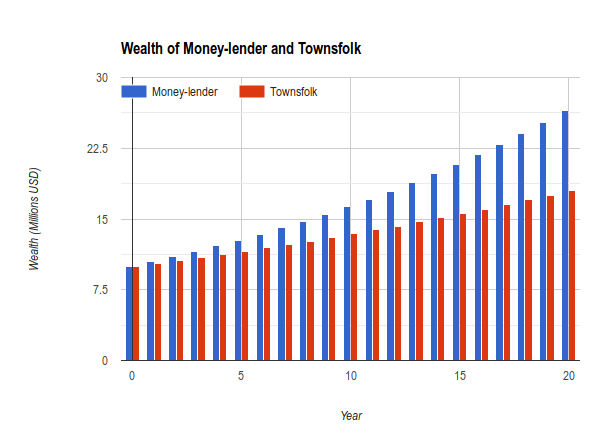 The chart only shows the money-lender’s wealth growth from his interest income. But as his wealth grows, he will invest the surplus wealth into buying up land, houses and business, so that his real wealth growth would be quite larger after 20 years.

The usurers at the Federal Reserve, Wall Street and the Chicago School of Economics would have you believe that the above situation is unavoidable, that it is just a fact of life, and that if you dislike money-lenders for their profiteering and rent-seeking, you are just hating them for their wealth.

What is never mentioned is that there is a way for the wealthy to invest their wealth without creating wealth inequality and giving themselves such an obscene advantage over the population, and that method is simply honest investment, what I call Socratic Finance, as Socrates mentions it in Plato’s Republic. It is to make the lender and the borrower share in their fair portion of risk and gain.

How is this magic performed? By prohibiting the charging of interest, as it used to be the law of England (look up the 1552 AD Act Against Usury of King Edward VI). According to the 1599 Geneva Bible Notes (written by John Calvin and other Puritans),

When the charging of interest is prohibited, money-lenders are prevented from increasing their wealth exponentially, without regard to the actual economy. They are made to invest in the real economy, and to share in its profits and losses. If the town’s money-lender cannot practice usury, and has $10 million in wealth compared to the town’s $10 million, he would be forced to spend his money investing in the real economy by buying businesses or starting new businesses, creating jobs in the process, and raising wages, as he has to compete with other business for available talent. Some of these endeavors would make a profit, and others would make a loss. If the town’s economy grows at 3%, and if his investments are spread throughout the town’s economy, then he would make a 3% profit along with the town, so that after a year, he wouldn’t be any more richer or poorer than the rest of the town as a whole. Everyone’s wealth would increase equally, so no income inequality is created.

If he wants to invest his money to finance housing, instead of using the corrupt practice of mortgaging, he would offer up houses on a rent-to-own basis.

In a normal mortgage, a person is made to carry the burden of a $300,000 loan while the money-lender continues to own the house. In the case of default, the money-lender gets the house back, sells it, and if it sells for less than the outstanding loan amount, he goes after the borrower for the rest of the principal. Most mortgage defaults happen during times of financial crises, when people lose jobs, and when houses lose value. If the home was mortgaged at $300,000, during a crisis it would sell for only $200,000. If the buyer had paid $20,000 of the principal off, they would lose the house, and still owe $80,000 to the usurer.

But Socratic home financing is a world apart from this. If a person gets a Socratically-financed home, and then is unable to make payments, the investor gets the house back and sells it, and the home-buyer gets his principal share of the house back. If he had paid off 20% of the principal, he would get 20% of the house’s sale price. In a Socratically-financed home, the buyer always gets some money back in the case of default, as there is no loan involved, it is real ownership transfer of the house. In the previously mentioned case of the $300,000 house, the buyer would get $40,000 back after foreclosure, instead owing $80,000.

Over the past 400 years, most Christians have continued the tradition of being utter disgraces to the name of Christ, so that today even the Vatican funds its operations through usurious lending. Even the Amish practice usury.

If but a probable suspicion arose
of a man to occupy that filthy trade
He was taken for a devil in the likeness of a man.
But good Lord, how is the world changed?

That which infidels cannot abide, Gospellers allow,
That which Jews take only of strangers
and will not take of their countrymen for shame,
That do Christians take of their dear friends
and think for so doing they deserve great thanks.

Today’s usurers try to absolve themselves from their sins, and whitewash their actions, through the practice of philanthropy. Almost every wealthy usurer is described as a “philanthropist” on Wikipedia. They gain billions by squeezing the life out of the economies that play host to them, using usury to drive a wedge into the economy and extract rent from it, then they spend a few hundred million funding hospitals, museums and universities, and lo and behold! They are philanthropists, not utter disgraces to the name of humanity and to all that is good and holy. It is to this usurer trick of philanthropy that Rabbi Hermann Adler, Chief Rabbi of the British Empire from 1891 to 1911, refers when he says:

No amount of money given in charity, nothing but the abandonment of this hateful trade, can atone for this great sin against God, Israel and Humanity.